Thousands of tourists and sunseekers attracted to the city as temperatures soared last weekend left nearly 50 tonnes of rubbish on the beach. 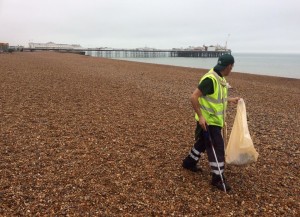 Brighton and Hove City Council’s litter pickers removed the massive amount of trash, starting as early as 5am to keep the pebbles as spick and span as possible.

The council publicly thanked its recycling and refuse staff for their hard work on the city’s busiest weekend so far on social media today.

It said: “On hot sunny days when thousands of day trippers arrive in the city and leave a mountain of rubbish behind them, clearing up afterwards is always a challenge.

“We continue to urge visitors to dispose of their rubbish responsibly, either by finding a bin or taking it home with them.

“Our crews work from 5am to 10pm seven days a week and empty litter bins on the seafront and in the city centre several times each day. During the summer months we also employ 20 additional street cleansing staff and put extra litter bins on the beach.”

And it wasn’t just litter pickers scouring the beach for things to pick up – metal detectors were also on the shore to see what treasures had been left behind amongst the empty cans and bottles, as this video below shows.

Paul Nelson, aka the Hove Beachcomber, found more than £13, a keyring and a gold bracelet left behind on the shingle.