Grand plans to replace Brighton’s ugliest building with more than 200 homes in three tower blocks will also include office space for Brighton start-ups. 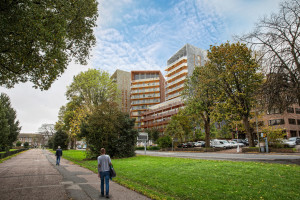 The city has the fourth-highest rate of start-up businesses per capita in the country, but a lack of suitable office space means many struggle to find a good home.

Hyde and First Base, which formed a joint venture called One Preston Park to buy Anston House last year – say they want the site to help Brighton’s economy grow.

A spokeswoman said: “We are bringing forward a mixed use development with residential and commercial space that responds to the demand in Brighton for high quality modern workspace, targeted at start-ups and businesses who want to collaborate and co-create with similar businesses.

“Our plans have been developed in collaboration with local resident, businesses and the council and we all share a desire to improve the ‘ugliest’ building in Sussex and transform this into a place that will be welcomed and celebrated, and make a real impact on Brighton’s economic future.”

Following a public consultation in December last year, One Preston Park is now preparing to submit designs for a residential-led development, with three towers ranging from 13 to 15 storeys to replace the nine-storey Anston House, which has been derelict for more than two decades.

The terracotta clad towers, designed by Terence Conran and Partners, will house 218 homes and 1,429sqm of commercial space for small to medium enterprises.