Do you know your neighbours? Brighton and Hove residents are urged to get mixing

Brighton and Hove’s first ever Know My Neighbour Week gets under way this weekend with the aim of encouraging residents to become better neighbours and help tackle social isolation.

The organisers have put together a programme of free events and activities, including a week-long pop up café at the One Church, in Gloucester Place, Brighton.

They are working with more than 20 local organisations and have teamed up with the Brighton Festival and Brighton Fringe to host performances, workshops and talks.

Dave Steell and Amy Goodwin from Know My Neighbour

The first events take place this weekend before the “launch event” on Monday evening (23 May). The launch is due to include a talk by author and journalist David Bramwell, writer of the Cheeky Guide to Brighton, and music from Louis Walken, a student from St John’s special needs school.

Brighton Pavilion MP Caroline Lucas will hold her weekly constituency surgery at One Church next Friday (27 May) as part of Know My Neighbour Week.

The organisers said: “While social isolation and loneliness is considered a growing problem in the UK across a range of age groups, it is a particular issue for older people who live alone.

“Nearly half (41 per cent) of over 65s in Brighton and Hove live in single households, significantly higher than the 31 per cent in the UK as a whole.

“The city also has a high annual population turnover with some areas seeing as much of 50 per cent of its residents move home at least once a year.”

Dave Steell, from Know My Neighbour, said: “Brighton and Hove is a great city that is generally seen as a friendly and happy place to live.

“However, it is also a transient place and that can make it harder for people to get to know their neighbours which can lead to social isolation and loneliness. 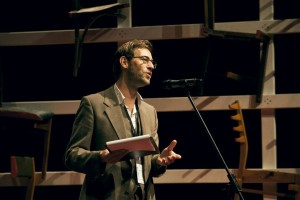 “Lots of organisations are working across the city to help tackle these issues but this is the first time they have come together as part of a single co-ordinated campaign through the idea of being a better neighbour.

“We’re hoping that Brighton and Hove residents will get involved during Know My Neighbour Week but this is a long-term project.

“We want our city to take the lead on this issue and eventually be the first in UK where everyone can say they know their neighbour.

“Just finding an excuse to say hello to your neighbour for the first time can be a really important first step.”

The pop up café, which will feature food from the Real Junk Food Café, is open from Saturday (21 May to Friday 27 May) from 11am to 7pm.

For more information about the dozens of events and activities taking place during Know My Neighbour Week, visit www.knowmyneighbour.org.