Four separate incidents within the space of an hour brought severe traffic congestion to the A27 between Lewes and Brighton early this morning. 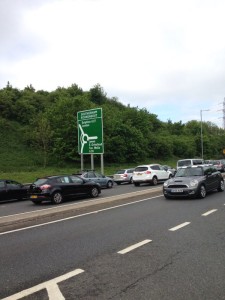 Queues on the A27 this morning by @SussexTW

Just before 7am a Volkswagen Sharan taxi heading for Gatwick Airport broke down on the westbound carriageway some 200 yards before the Hollingbury slip road.

Minutes later a Peugeot 207 car and a Ford Transit van, both also travelling west, were in collision near the same junction. No one was hurt.

Then at 7.14am a Skoda Fabia travelling east towards Lewes collided with a central reservation crash barrier while approaching the Ashcombe roundabout, near Kingston.

The woman driver had complained of chest pains but after checks by paramedics she was able to return home to Brighton.

Then at 7.55am four cars, all travelling west, were in collision 100 yards before the B2123 The Drove junction at Falmer. One driver sustained shock and another, a man, was taken to the Royal Sussex County Hospital, Brighton, for treatment to a back injury.

The combined incidents led to traffic queues building up in both directions until the various scenes could be cleared.