Bye bye Bobby! Zamora is one of five players let go by Brighton and Hove Albion

It’s over. Bobby Zamora is leaving Brighton and Hove Albion along with four fellow players as the football club also sends two loan players back to their home clubs.

The other four footballers to leave at the end of next month are club captain Gordon Greer, Inigo Calderon, Andrew Crofts and Adam Chicksen.

Brighton and Hove Albion have offered new contracts to player of the season runner-up Bruno Saltor and goalkeepers Niki Maenpaa and Casper Ankergren. 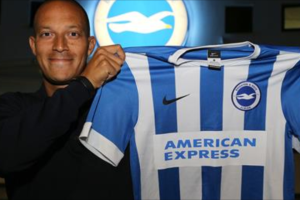 Manager Chris Hughton said: “It never gets any easier to make these decisions or to deliver the news to players – particularly on the back of such a good season.

“In the case of Gordon and Calde, there is the added factor of their standing with the club. They are our two longest-serving players in the current squad and have each achieved so much for this football club.

“Similarly with Andrew Crofts, he has been an excellent servant across two spells here. He’s another who’s given so much to the club.

“With Bobby, his history with Brighton was written long before I arrived but he has only added to that in this past season, with his performances, goals and contribution in the dressing room.

“Adam is a fantastic young professional and while he hasn’t been able to breakthrough into the first team here, I am certain he has a bright future ahead of him and plenty to offer going forward.

“On behalf of everyone at the club I would like to thank them all for their efforts and wish them the very best for the future. They are welcome back here at any time, and each of them has been an absolute pleasure to manage.”

Chairman Tony Bloom said: “I would like to thank each of the five players for their efforts on behalf of the club but in particular four players whose names loom large in the history books of Brighton and Hove Albion.

“Gordon has been our captain over the past six seasons and has been a key part of our team since his arrival from Swindon. Leading us to the League One championship in 2011, and three top-six finishes in the Championship, he has shown great passion and determination for the club.

“Since he arrived in 2010, Calde has been an inspiration – on and off the pitch. His achievements as a player: coming in and helping stabilise the team in 2010, winning the League One title in 2011 and helping us to three playoff campaigns have earned him cult status in the city.

“It’s not just his work on the pitch which have made him so popular with our supporters. His work in the community has been rightly recognised with a number of personal awards and accolades.

“Crofty has been a great servant to us, across two separate spells with the club, spanning five years in total. He was captain in his first spell and has been equally inspirational this time around. He has been extremely unfortunate in injuring his cruciate ligament twice in his most recent spell.

“Bobby is arguably the club’s greatest-ever striker and he has had a fantastic career, including that unforgettable first spell with the Albion – and this season’s contribution has been marvellous and such a thrill for all our fans.

“The label of ‘legend’ is perhaps overused but there is no question that Bobby has attained this status with Brighton and Hove Albion.”