National Table Tennis day to be showcased in Brighton this summer

UK table tennis aces will be showing off their ping pong skills in Brighton this year for National Table Tennis Day on Thursday, July 14.

Clubs around the country will be serving up celebrations to promote the sport. 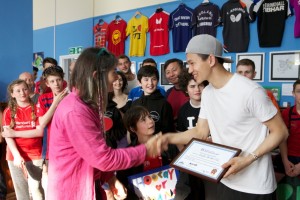 Hoang Nguyen, Vietnamese refugee and player and coach at Brighton Table Tennis Club receives the UK’s first Club of Sanctuary award from Jenny Lansdell, Chair of Sanctuary on Sea. The award was made for the club’s work with young refugees.

One of minors is now a qualified coach and another is training for his coach’s badge.

It became the first UK sports club to be awarded Club of Sanctuary status, being awarded by Brighton and Hove’s Sanctuary on Sea organisation, part of the nation-wide City of Sanctuary movement of over 70 member cities and towns.

Tim Holtam, BTTC Director, said: “We are greatly honoured to be the first club to achieve this recognition. We believe sport has a critical role to play in helping these young people to become part of our society.”

This followed the club receiving Table Tennis England’s 2016 Equality Award, for its work with unaccompanied minors, looked after children and people with learning difficulties, in March this year.