Kemp Town Carnival organisers say they have complete confidence in the police to ensure any far right marches don’t disrupt this year’s festivities. 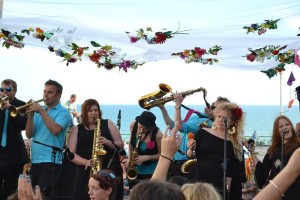 A No More Refugees demo has been called by nationalist groups for Saturday, 4 June – the same day as this year’s carnival.

But carnival director Matthew James Cook urged people to ignore anyone turning up in the city hoping to cause trouble, and to party in Kemp Town instead.

He said: “We notified the police a few weeks ago as soon as we heard about it. The force has had no official approach by the organisation to march.

“My instinct is that it will fizzle out or not happen at all, or it will be a handful of people surrounded by police that won’t be able to cause any trouble.

“I have got complete confidence in the police to handle it.

“Don’t give them the time of day, come to the carnival and get involved in something that is wonderfully diverse and celebrates everything. Just ignore them.

“If they do come to Brighton what do we want to give them? A memory of getting into a big old fight or coming along and nobody paying them any attention until they get bored. I think the latter.

“If it’s going to be taking place that’s exactly what I’ll be encouraging.”

The far right groups, named Pie and Mash squad and South Coast Resistance, created a Facebook event called No more refugees demo last month but there has been little recent activity on the page.

A far right march was planned on the same day of the last Kemp Town Carnival, in 2014, but it didn’t impact on the carnival at all.

Mr Cook said: “In 2014, the last time the carnival happened, there was a march the same day and we saw nothing of it. The police handled it very well and kept it very confined to a small area.

“If they do turn up the police are very much working with us on it 100% and any additional policing that we feel needs to be put in and around the carnival will come at no extra cost to us.

“We have already paid a small amount to have a police presence as part of our standard operation.”

The carnival, which hosts six live music stages, parades and street theatre, is a community collaboration that begins on St. Georges Street.

He said: “The outcome of this has been an alliance. The fringe festival would be right in the thick of it, passing the Spiegeltent, so Julian shares our concerns. He has written a letter that we are taking to the police as well.”

There have been no counter demonstrations planned, and Mr Cook advised people not to plan one.

He said: “My advice to anybody who is thinking about getting involved in any counter demonstrations is to not, it’s a complete waste of time and it plays right into their hands.”

Meanwhile, the carnival is looking for volunteers. Anyone interested can apply here.