A Brighton sandwich shop’s pay it forward scheme has seen more than 300 hot cups of tea and coffee served to the city’s rough sleepers since it started four months ago. 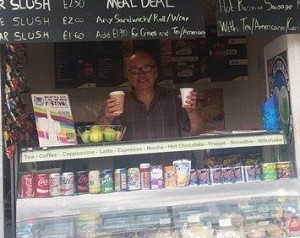 Paul Holden at the sandwich shop

The scheme at Hungry Holden’s in Castle Square off the Old Steine began in January when a tourist asked them to take £10 to give ten cups of tea to the homeless.

Rough sleepers now come in every day, and owners Ros and Paul Holden are asking more customers to come forward to keep the scheme going.

Ros Holden said: “A man from Thailand gave us £10 and asked we gave 10 cups of tea to homeless people about four months ago. This gave us the idea.

“We went home and re-watched the film Pay it Forward and that was our inspiration.

We chat a lot to the homeless especially first thing in the morning when they are really at their coldest and lowest ebb – they have endured the elements through the night and they are tired, exhausted and feeling broken. I know a tea or a coffee is a small thing but they really appreciate it.

We have new homeless people coming everyday and also lots of regulars. They are genuine people who are down on their luck and a warm beverage and friendly chat makes a big difference.”

At the moment, customers have to come into the shop to make a donation, but the Holdens are looking into having an online donation page on their website in the future.

Meanwhile, the charity’s collection box, which last year raised more than £150 for refugees, will now be collecting for RISE, a local charity supporting families in crisis who have been victims of domestic abuse.