A Brighton nursery school has won a national award for encouraging children to scoot, cycle and walk to school. 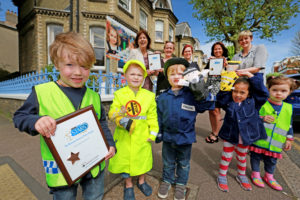 Hannah Moss, owner and manager of Footsteps Nurseries said: “We are really pleased that all of the hard work we have done over the last few years has been recognised, and we are very proud of being the first nurseries in the city to be awarded Modeshift STARS.

“Our work has really helped our families, children and staff focus on active, safer and sustainable travel at our three nurseries.”

Modeshift STARS is a nationwide scheme designed to recognise when schools and early years’ groups show an exceptional commitment to active travel in order to improve the health and well being of children.

Chair of the environmental committee, Councillor Gill Mitchell, said: “The work that the Footsteps nurseries are doing is a great example of how active and sustainable travel can be encouraged in a fun way and from an early age.

“Walking, scooting or cycling to nursery, or parking away from nursery and walking the last five or ten minutes, can contribute significantly to recommended activity levels, as well as helping to ease congestion around the city.”

The council is now working alongside several other nurseries throughout the city to help them achieve the STARS award.