Sandi Toksvig came to the first birthday celebration held by the Women’s Equality Party in Brighton.

The comedian was a co-founder of the national party and she was joined by party leader Sophie Walker as they marked a year of the party’s Brighton and Hove branch.

They went along to the Synergy Centre, in West Street, for the fundraising celebration of the local party’s achievements over the past 12 months.

The party said: “The Brighton branch has come a long way since its first meeting a year ago in Saltdean Lido and has become one of the busiest branches in the country. 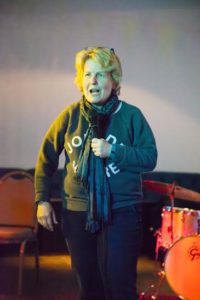 “The branch was officially launched last October and since then we have run workshops to formulate policy, created a structure, spread the word about the party and reached out to organisations such as Rise, the Survivor’s Network and Brighton Women’s Centre.

“We helped launch the International Women’s Day celebrations at the Dome and created a twitter storm with our Suffragette Walk around Brighton.

“We have a number of campaigns and research projects in the pipeline which we will unveil in the coming months.”

“It has been a momentous first year of events, development and political activism. Of course we are still looking for volunteers and in return we can offer training, fun and friendship.

“If you would like to find out more, email us at wepbrighton@gmail.com.”

The Brighton branch of the Women’s Equality Party officially began on Sunday 3 May 2015 when only two other branches were up and running – Edinburgh and Birmingham. There are now more than 70.

At a launch event about 130 people went along to help decide how to implement policies with Brighton in mind.

The Brighton WEP branch covers the whole city of Brighton and Hove and holds meetings all over the city. With no neighbouring branches yet, supporters include people from surrounding areas such as Worthing and Littlehampton, Eastbourne, Lewes and even Crawley.

The party said that among its reasons for existing are