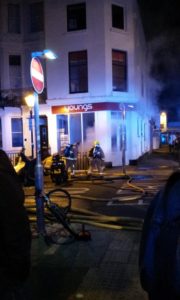 A fire which claimed the life of a 45-year-old man in Kemp Town in the early hours of Saturday morning is not being treated as suspicious, police say.

Alan Phillips, who worked for the Claude Nicol Centre, in Eastern Road, was found in the basement flat on the corner of Upper St James’s Street and Charlotte Street by firefighters after they were called out at 2.05am.

A fire investigation was launched by Sussex Police but the force said today that it was no longer treating the blaze as suspicious.

Brighton and Sussex University Hospitals NHS Trust confirmed Mr Phillips worked for them as a clinical nurse manager at the centre where he was popular with his colleagues and will be greatly missed.

A spokeswoman said: “At 2.05am on Saturday (2 July) we were called by the fire service to a basement flat in Upper St James’s Street where a fire had been reported. A man, believed to be the 45-year-old sole occupant, was found in the flat by firefighters but sadly he died at the scene.

“Following an investigation the fire is not being treated as suspicious and the coroner’s officer is continuing inquiries.

“The man has not yet been formally identified.”

Since news spread of the blaze on Saturday, flowers have been left at the scene, with tributes written in cards attached to the railings by the flat.

One, from Afra, read: “I can’t believe you have gone, such a huge presence and personality, we will miss you terribly.”