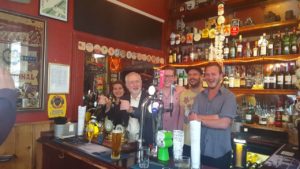 About 1,500 people from Brighton and across the south east came to see Mr Corbyn in the latest of a chain of planned rallies around the country to defend his leadership against rival Owen Smith – who came to Brighton himself last month to help canvass in Whitehawk.

But initial polling by the local party of its membership shows that Mr Corbyn’s support has dropped to less than half those polled so far – with a substantial chunk of members undecided as to how they will vote.

A local Labour source said: “Initial polling of local members suggest Corbyn’s lead is not as big as many assume.”

Recent national polls also show that Corbyn is losing support amongst some of those who previously supported him, with much larger support amongst new members than older ones.

This mirrors many of his former advisers, including economic gurus Danny Blanchflower and Richard Murphy, as well as columnists Owen Jones and Zoe Williams expressing doubts over his leadership abilities.

Before his appearance at the Hilton Brighton Metropole, Mr Corbyn went out and about in middle-class Kemp Town, part of the East Brighton ward where Labour candidate Lloyd Russell-Moyle is standing in tomorrow’s by-election.

He pulled a pint at the St George’s Inn in Upper Sudeley Street (although as a teetotaller he himself drank an apple juice) and doorknocked in Sudeley Place.

“And I am very concerned about the suspension of the party in Brighton. I have asked for that to be investigated and dealt with immediately.

“I want the party back in Brighton back and functioning and full democracy for everyone in Brighton as soon as possible.

“But that hasn’t stopped Brighton party members doing campaigning work and I was out this afternoon with Lloyd trying to get the votes.

“We’re getting a great response and a great reception from everybody all across East Brighton this afternoon.”

His full speech can be viewed here.

Mr Corbyn was referring to the suspension of the local party and the voiding of the election of pro-Corbyn candidates, including former Fleet Street journalist and Brighton and Hove Independent owner Greg Hadfield, who greeted Mr Corbyn on his arrival at Brighton Station earlier in the afternoon.

The elections were overturned following hotly disputed allegations of ballot irregularities and eligibility of some of the candidates, including the new chair Mark Sandell, committee member Phil Clarke and secretary Greg Hadfield.

Two Labour councillors were present at the rally – Cllr Kevin Allen spoke and criticised Hove’s Labour MP Peter Kyle for his disloyalty to Mr Corbyn, and Cllr Daniel Yates was in the audience.

Cllr Yates later said that while he was undecided, he was now swaying towards supporting Mr Smith, saying: ” I can’t really put a fag paper between them on policy and although Jeremy works at rallies I have seen that Owen’s style suits mainstream media well.

“Jeremy has certainly got the ability to motivate people in a room. But I am left wondering if there are enough people like those 1,400 in Sussex who came along tonight.

“Overall. It’s half time. And I’m 57% smith. 43% corbyn. But it’s all to play for and my idealistic side might win over my pragmatic half.”

Other Labour councillors said they had not been invited to the rally, which was organised by Momentum.

The candidate himself, Lloyd Russell-Moyle is staying neutral, saying he welcomes support from both leadership candidates in what has been one of the most scrutinised council by-elections in the city’s history:

Pleasure to have @OwenSmith_MP & @jeremycorbyn canvass with me in E.Brightion – Whoever you want as @UKLabour leader we’re united in action.