An officer who was given a lift by a quick thinking taxi driver and his passenger while he was giving chase to a suspect in Hove wants to thank them for their help. 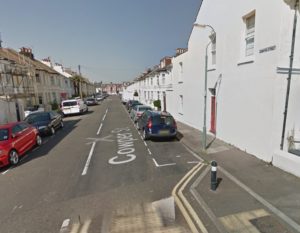 At around 11.30pm on 29 July officers stopped a vehicle in Cowper Street after officers suspected drugs may be being transported inside it. While one officer detained one suspects in the vehicle, the other ran from police.

Sergeant Andy Newman gave chase and was soon assisted by a taxi driver and his passenger who gave him a lift.

After a short chase ended in Rutland Road, Sgt Newman directed the driver to stop and then managed to detain the suspect. The driver and passenger then checked he was ok before going on their way.

While awaiting for his colleagues to arrive at the scene another member of the public also stopped and asked him if he required any assistance.

Sgt Newman said: “I was on my own with a suspect so I was gutted that I didn’t get a chance to get the details of those who assisted me as I would like to thank them for their actions. It is fantastic to know that we have support from the public.”

Officers found a large quantity of cocaine during the search.

They have been released on bail until 11 October.

If you were the taxi driver or passenger involved please get in touch with us by emailing 101@sussex.pnn.police.uk or ring 101 quoting serial 1709 of 29/07.