i360 closed for technical tests after third pod breakdown

The i360 is to remain closed today for tests after the pod broke down yesterday afternoon for the third time in four days. 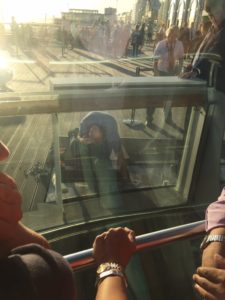 An engineer tries to fix the fault. Picture by Nick Burlin

Almost 200 passengers were trapped inside for more than an hour late yesterday afternoon just above ground level, an echo of Thursday’s incident where a similar number were stuck a few feet above for two and a half hours.

The BBC reports that yesterday’s stoppage was the second one that day.

A spokesman for the attraction said this morning: “British Airways i360 will close today while specialist technicians conduct further checks on site.

“We apologise for any inconvenience caused. Customers who have booked tickets for flights today will be offered alternative visits or refunds.”

Meanwhile, the widely remarked use of a camping toilet has given rise to a parody Twitter account, Boginthepod.

Still early days but I have this record firmly in sight. https://t.co/vVl8TuougU