More than 20 horses remain unclaimed after they were removed from Brighton stables in the middle of the night in the culmination of a long-running dispute between its owners and the council. 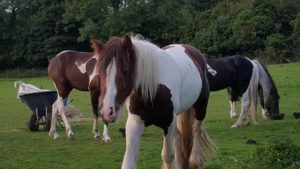 Danny Cross, who ran Stanmer Horses, has hit out at the council after being evicted last week, accusing them of acting illegally under cover of darkness as he was in hospital by his sick partner’s bedside.

But the council insists it is acting within the law, and said it only undertook the eviction and removed the horses because of unpaid rent and concerns for the horses, many of which are owned by third parties, after Mr Cross failed to engage with them to find a solution over several months.

Brighton and Hove News understands that the welfare concerns centre around hoarding, with 38 horses kept at the stables by the time the eviction happened.

In a lengthy Facebook post, Mr Cross said the council had suggested breaking up the herd, but that he resisted this because of the emotional impact it would have on the horses, many of which had been rescued themselves.

He added: “We don’t know whats going to happen next and we are trying to move mountains to get our horses back to their loving home which is with us.

“The council have taken ownership of my horses, and say I or anyone else who claims to own these horses have until 3 October 2016 to claim them back or they will be filtered through charity venues and those that cant be rehomed will be put to sleep and shot.

“However without the council’s support to return to the park, and at a cost of nearly £200,000,00 we seriously don’t know where to go.

“Our hearts have all been ripped open and its an enormous emotional time for us all.”

A council spokeswoman said: “We have tried repeatedly to work with the tenant of the stables, Mr Cross, to address various issues, but there has been no engagement with us from him and an apparent unwillingness to take any action to alter the management of the yard.

“Mr Cross has not met his obligations under the tenancy agreement which he entered into: he has not paid everything he was due to pay for his use of the land and the council has had significant concerns about his management of the yard and the implications for the horses, for neighbours and other council tenants.

“It is important to remember that he has no formal welfare status or role; nor has he been operating as a registered charity.

“We issued an eviction notice a year ago and wrote to explain the reasons. All offers of meetings and other means of engaging have been declined. An extension of time was offered for Mr Cross to remove or re-home the horses. Unfortunately, all efforts were ignored and there was no alternative but to take back possession of the property and in so doing the horses.”

Of the 38 horses, removed by specialist equine bailiffs, the council says 15 have been returned to five owners, and claims for nine more are being verified by the bailiffs. Mr Cross told the Horseytalk website that he had submitted claims for 15 horses but that he did not have paperwork for the rest.

The council also said one bay mare has been put down on veterinary advice and the remaining 23 are still unclaimed. It strongly disputed claims that owners would have to pay £5,000 to claim a horse, saying that while there would be a charge, it had not yet been calculated and this figure was incorrect.

Anyone who wishes to claim a horse, or who has contact details for the owners, should email animals@grcbailiffs.co.uk. Owners will need valid horse passports or statutory declarations.

Any horses remaining unclaimed by Friday, 7 October at 5pm will be re-homed to a horse welfare sanctuary.

Mr Cross also said that the eviction had been supported by the RSPCA, and told Horseytalk that several anonymous complaints had been made, but that the RSPCA had only ever given advice in response. He also said that a vet had checked the horses over and given them a clean bill of health.

She said: “We will always look into, and if necessary, investigate any complaints made to us about animal welfare, but the vast majority of the time issues will be dealt with by advice and education.

“It is not always appropriate to publicise this information for legal and data protection reasons so I can’t go into detail here, but can confirm we have not been called about these horses for quite some time.”