A mobile telephone mast has been installed despite the council refusing permission because a five-day delay in the post room meant it was refused too late. 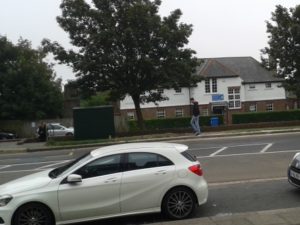 Engineers installed a green box for the 12.5m Vodafone mast in Warren Road after dark last Thursday night, to the dismay of residents who had objected to the application and thought it had been rejected.

Today, the chair of the city council’s planning committee apologised for the blunder and said that council procedures were being tightened up as a result. However, the mast will now remain.

Annie Dorling, who runs a therapy studio opposite the mast site, said she and other residents objected because of the risks of radiation from the mast, particularly as there are two schools, a nursery, community centre, nursing home, hospital and doctor’s surgery nearby.

She said: “We as residents in Woodingdean do not object the telephone companies to build a mast, but not in the centre of Woodingdean. They can build away from the people, that what we want them to do.

“We can live without mobile phones, but we cannot have bad health because of it. Profits for mobile phone companies is not the human kind’s concern and the council should be strong enough to turn it down at all cost.

“The person who made that mistake should be personally responsible to make it good.

“On the other hand, a refusal means a refusal, the companies should have a good moral and accept it regardless the days in question. The mobile companies are trying to find loophole to carry out their money making projects to gain more profits.”

Ward councillor Dee Simson, who had lodged an objection to the application, said: “The incompetence in this whole situation is unbelievable. Woodingdean residents are now left with a 12.5metre phone mast that should never have been allowed to be erected.

“Residents met their democratic obligations by submitting written objections to the mast along with myself and others so why can’t the council fulfil theirs?

“The people of Woodingdean are quite understandably very upset that such a structure is being placed in front of the village’s historic cottages which they consider precious to the community. It will completely change the street scene.”

The application for approval for the mast and two equipment cabinets was rejected by the council on 23 May 2016. All local planning authorities must issue approval decisions within 56 days of receiving an application, failure to do so means proposals are then deemed to have been approved.

The council’s planning team received the application on 29 March and the decision to refuse approval was issued on 23 May, the fifty-sixth day. However following work to install the mast starting last week, an investigation has shown there was a five day delay between the council’s post room receiving the application and the planning team receiving it.

This resulted in an incorrect receipt date and the decision being issued after 56 days. Therefore, the phone mast was deemed to have consent.

Councillor Julie Cattell, Chair of the planning committee said: “I’m very sorry for the delay that occurred and I apologise to Woodingdean residents who opposed the mast and who took the time to make their views known to us.

“I have taken this up with senior staff at the council and although this will be of little comfort with regards to this case, this terrible oversight has resulted in the council’s procedures being changed to reduce, as far as possible, a repeat of this very unfortunate situation.”

The application was refused because of the impact the large mast would have on the street scene.

As well as objections from three residents, the residents’ association and Cllr Simson, one resident wrote in to support the plans as they would boost signal and “people don’t realise that they get over 100 times more radiation from the sun than a telecom post”.