Vinylman has reached the end of the track! Record dealer Geoff Finch is bowing out after almost 40 years.

Mr Finch, who lives in Patcham, will host the Brighton Record Fair at the Brighton Centre for the vinyl – sorry, final – time on Sunday 20 November.

While he admitted to being 67 years old, he said: “Vinylman the character is under 40. I created that character and he was a hero fighting for vinyl – and of course trying to make a bit of money.”

But despite the advent of CDs and the rise of online streaming, vinyl somehow survived and is even thriving although sales volumes are some way off their heyday. 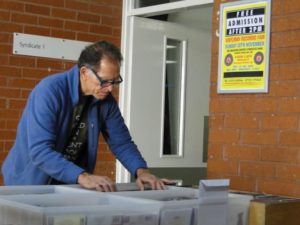 Although Mr Finch is selling off his own stock at his final fair and putting his alter ego to rest, Vinylman could – like a vampire or a phoenix – re-emerge at some point, he said, adding: “I’m still going to buy and sell records.”

Mr Finch moved to Brighton in 1970 when he was working as a DJ. He started selling records in the Saturday morning market in Upper Gardner Street in 1976 before opening Vinyl Demand, in Red Cross Street, two years later.

“I was part of the industry of happiness. I’m so proud of that.”

He started the record fair in 1978 at the Madeira Hotel in Madeira Drive but, having outgrown the venue, four years later he switched to the Brighton Centre.

The record fair has up to 70 stallholders selling all genres of music, including rock and pop, punk, dance, classical and jazz, on vinyl and CD.

“Those are our markets,” Mr Finch said, with three distinct types of buyers. “Some just want to play great music, others want to collect it and own a piece of vinyl history. 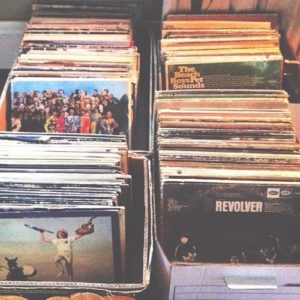 Mr Finch said that since the fair was founded in 1978, a fortune in rare, collectable and bargain vinyl has been bought and sold.

One time, he said, “Michael Jackson’s management rang me and said can he come in early to buy some records. So I said, sure, why not? All hush hush.

“He never showed. I was saving all those early Beatles tunes for him – but he already had them. At least Paul Weller, Jimmy Page and even a famous snooker player showed.”

One of the regular dealers, Chris Le Grys, will be taking over from Mr Finch after his final fair on Sunday 20 November. The event runs from 9.30am to 3.30pm, with early bird entry from 8.30am.

And to mark the end of an era, Mr Finch shared his all-time top five – in the style of fictional record shop owner Rob Fleming in the Nick Hornby novel High Fidelity.

1 Watching the Detectives by Elvis Costello – Mr Finch said: “I was pretty much a little bit of a hippy a couple of years before that. It was only when I had my record collection stolen, I was forced to come up to date.”
2 Be My Baby by the Ronettes
3 Don’t Come Close by the Ramones
4 White Bird by It’s a Beautiful Day – Mr Finch said: “It’s a stupid one – a hippy one!”
5 Tainted Love by Gloria Jones – but jointly alongside Soft Cell’s version of Tainted Love – Mr Finch said: “I love the organ ‘stops’ instead of the hand claps.”

And he added: “That’s really hard. Ask me again in an hour and it’ll be completely different.”