Real-life smugglers’ inn given second chance after landlords booted out

A Brighton pub with a history of football violence caught selling large quantities of smuggled spirits has avoided losing its licence – but only on condition its former landlords are shown the door. 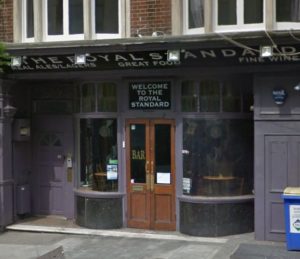 The Royal Standard in Queen’s Road was raided in June by police and trading standards as part of an operation targeting premises believed to be linked to a drug dealing ring.

Officers seized smuggled whiskey, brandy, amaretto, sambuca and fake rum both on sale and in its cellars, and as a result the pub been closed since.

Trading standards now believes the bottles are old stock from the Station XPress off licence a few doors down which closed after stolen alcohol was seized when the Standard’s landlords Alma Dema and Nick Humphries were in charge.

In a statement to a licensing committee hearing last Friday, trading standards manager Joanne Player said: “Customers purchasing alcohol at the premises would have had no opportunity to examine the bottles before drinking the alcohol … by supplying illegal alcohol, the business risked supplying dangerous alcohol to their customers.

“Both Alma Dema and Nick Humphries have a long history of involvement in illegal alcohol, including smuggled alcohol.

“Trading Standards have no confidence that the management are competent to run these premises.”

Ch Supt Kemp said: “Despite this meeting, and despite regular contact with the venue prior to football matches, Sussex Police continued to experience problems at the premises involving football fans.”

Of the raid, he said: “It was established that Alma Dema was related to individuals recently arrested in the first phase of Operation Skye for conspiracy to supply Class A drugs. Sussex Police had reasonable grounds to believe that local business premises linked to these individuals (including the Royal Standard) were being used for criminal purposes.

“The fact that most of the bottled stock in the Royal Standard was suspected illegal alcohol supports the belief that the management of the public house may be using the premises for illegal purposes.”

In conversations with council officers, Nick Humphries and Alma Dema maintained they were a victim of a rogue trader called Salvatore Capuano, who owned Bachuus Europe LTd, with whom trading standards have had several dealings through various companies.

Mr Humphries later proposed removing Ms Dema as landlady, undertaking to buy all alcohol from a reputable supplier and to not show football in order to address Brighton and Hove City Council’s concerns.

But both council officers and police went ahead and asked the licensing committee to revoke its licence.

At a hearing held behind closed doors on Friday, the panel heard that although the evidence about how the pub had been run was damning, negotiations between the council and Admiral Taverns to keep the licence but ban Alma Dema and Nick Humphries from running it, with new conditions agreed.

Chair of the committee Cllr Jackie O’Quinn said: “We have heard compelling evidence from Trading Standards of the way in which this objective has been undermined by the sale and storage of illegal alcohol at these premises. Furthermore we have heard from the police as to issues they have encountered at this premises notably football related disorder and the way in which the management failed to address these issues despite police intervention and advice.

“In our view such serious mismanagement and criminal activity at these premises would ordinarily justify revocation of the licence.

“However, there have been negotiations between trading standards, and the premises licence holders Admiral Taverns Ltd. We do consider that the licence holder has been working effectively with the responsible authorities since these issues have come to light.

“The premises is not currently trading and there is no DPS in place. A condition has been proposed and accepted by trading standards whereby Alma Dema and Nick Humphries will be banned from working in any capacity or being involved in any capacity at these licensed premises.

“The police have also proposed a set of conditions to attach to the licence to promote the licensing objectives. These have been agreed to by the licence holder with some amendments.”

The conditions include installing digital CCTV, with footage stored for 28 days and freely and immediately available to police, membership of the Business Crime Reduction Partnership, bouncers, and an incident log.

Football fans will be served in glasses made from plastic or toughened glass, and customers won’t be allowed to take alcohol out of the pub during football matches.