A rocket planted in a wheelie bin melted it down to the ground and left another with a gaping hole in it this weekend. 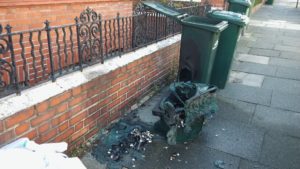 As the skies lit up for Bonfire Night on Saturday, this bin in Tivoli Crescent also caught alight after a firework was lit and put into the bin.

This bin was completely destroyed, with another next to it s left with a gaping hole.

Its owner Christina Summers said: “I was away from Brighton all day and got back late(ish) and was very conscious (and rather puzzled) that the fireworks outside were especially noisy – louder than I’ve ever heard them before.

“I remember thinking it sounded like explosions that weren’t the usual firework kind but more incendiary than that. Anyway, I ignored it and became engrossed in other things.

“It was only on Sunday morning when I left the house that I saw this mess. I was surprised how shocked I was when I glanced at it and then it computed – it was like a double-take.

“I noted that all the other bins in the street were fine and that there was absolutely no sign of damage anywhere else.

“It can’t have been the fallout from fireworks – someone must have lit them (or something) and put them inside the bin. Either way the force must have been tremendous looking both at the almost annihilation of the bin and the big hole in the one next to it.

“I immediately took a picture of it and had intended to send it to the council right away but the day took over. In the end I stuck it up on Twitter on Monday and phoned the council. I must say I am really impressed with how quickly they came and cleared it up and replaced the two bins.”