Two men are being hunted by Sussex Police after being caught on camera stealing poppy collection boxes in the run up to Armistice Day and Remembrance Sunday.

The men have stolen at least five poppy boxes in total from premises in Brighton, Hove, Peacehaven and Bexhill.

Sussex Police asked the public: “Do you recognise these men?” 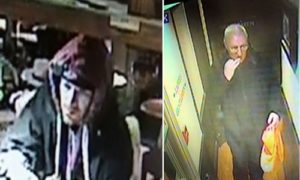 The force said: “Two men have been stealing donation boxes intended for the Royal British Legion.

“Just days before Armistice Day, two heartless thieves have been stealing the poppy collection boxes from businesses across Sussex.

“Police would like to speak to two men believed to be connected to the thefts.

“One man is connected to thefts at the Pump House in Market Street in Brighton last Saturday (5 November) and at the Co-op in South Coast Road in Peacehaven and the Royal Mail delivery office in Devonshire Square in Bexhill on Tuesday (8 November).

“On Monday (7 November) a collection box was stolen from the Sussex pub in St Catherine’s Terrace and the Card Factory in George Street both in Hove.”

Resolution centre supervisor Justin Norman said: “We would very much like to speak to these two men.

“The older man, connected with the thefts in Hove, is described as white, 40 to 60 years old, of large build and with short greying hair.

“The other man, believed to be connected with the other three thefts, is white, 6ft, between 25 and 30 years old, with dark hair and black stubble.

“We don’t know at this stage if these men know each other but we think they are local to Brighton and Hove.

“Thefts of this type are unacceptable as people have donated this money with the intention of it going to the charity.

“If you recognise yourself, please do call in. We’d love to have a chat.

“We would also like to take this opportunity to encourage businesses to make sure that their collection boxes are properly secured to prevent their removal.”

Anyone who recognises the men is asked to phone Sussex Police on 101 or email 101@sussex.pnn.police.uk.