A major search was launched last night after a man went into the sea off Brighton Beach at the Kings Road Arches – but sadly, despite being rescued, the man died. 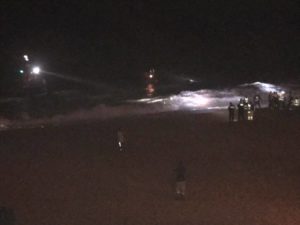 A woman who went into the water to help the man raised the alarm after escaping the waves herself.

A police spokeswoman said: “A major air and sea search co-ordinated by the UK Coastguard involving police, East Sussex Fire and Rescue, ambulance, Brighton and Shoreham RNLI lifeboats, the Coastguard helicopter and the mobile coastguard rescue units searched the foreshore and the sea east and west of Brighton Palace Pier.

“The man was pulled from the water by the coastguard rescue unit and paramedics at 1.38am and given CPR. He was taken to the Royal Sussex County Hospital, Brighton but was sadly pronounced dead.

“A woman who was with the man was checked over by ambulance paramedics after she also went into the water to help him, but managed to get out and raise the alarm.”