The government has said that it will put £17 million towards two key projects in Brighton, using money from the Local Growth Fund.

The two schemes are the proposed conference centre and arena at Black Rock and the new Bio Innovation Centre being planned by Sussex University.

The money accounts for more than a quarter of the £66 million allocated to the Coast to Capital Local Enterprise Partnership (LEP) area which stretches from Croydon via Crawley to Chichester and Newhaven.

The Greater Brighton Economic Board co-ordinated the local bids including the two projects championed by Brighton and Hove City Council which have garnered £17.6 million between them.

The board said that £12.1 million would go towards the Black Rock part of the £540 million Brighton Waterfront project.

The Brighton Waterfront project involves extending the Churchill Square shopping centre down to the seafront. The Brighton Centre will close and a conference centre and arena will be built at Black Rock instead.

The Bio Innovation Centre has been awarded £5.5 million to act as a business incubator for new life sciences projects. It will be housed in the £99 million new Life Sciences Building planned for the Sussex University campus at Falmer. The building is expected to be granted planning permission on Wednesday (8 February) in a meeting at Hove Town Hall.

The Greater Brighton Economic Board nominated projects that were awarded £48.7 million – or almost two thirds – of the £66 million granted to Coast to Capital.

It is the third round of Local Growth Fund money to have been allocated, with the Greater Brighton total running at more than £140 million. This is almost half of the £304 million being invested through the LEP.

The public money is expected to help secure an even bigger sum from private sector investors. The Brighton Waterfront scheme, for example, will also rely on funding from Standard Life, the owner of Churchill Square.

Brighton Kemptown MP Simon Kirby said: “I have been lobbying ministers for a long time for funding to support local projects and am delighted to see this money coming to Brighton for the Sussex University and Black Rock projects.

“This funding will hugely benefit the local community and help to boost economic growth.”

Communities and Local Government Secretary Sajid Javid said: “As part of efforts to deliver an economy that works for everyone, the government is equipping local people with the resources they need to drive forward local growth.

“That is why we’re giving £66.06 million new money to Coast to Capital to give businesses the support and opportunities they need to achieve their potential – on top of the £238.2 million we have already awarded.” 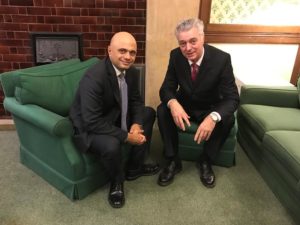 Sussex University pro-vice-chancellor for research Michael Davies said: “This is an extremely welcome cash injection by the government into the Greater Brighton region.”

“It will also provide opportunities for skills training, work experience and employment for our life sciences students.

“We are looking forward to working closely with our partners at Coast to Capital to get this project off the ground.”

The Sussex Innovation Centre’s executive director Mike Herd said: “The provision of specialist laboratory space is a real obstacle to early-stage businesses making inroads in the life sciences sector, so the announcement of this funding is great news for the region’s innovators.

“It gives us the opportunity to create a truly unique facility for the south east, bringing together a community of researchers and businesses in close proximity.

“This will further encourage the sharing of ideas, knowledge and experience between the academic and commercial world, and support the development of biotech start-ups and spinouts.”