A Brighton park will close next week for the first stage in a £53,000 makeover paid for by developers which should see it in great shape for its spring festival. 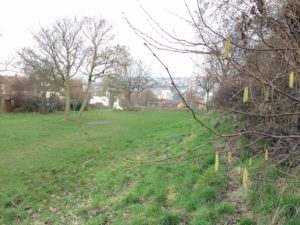 William Clarke Park off Hartington Road, better known by the Elm Grove and Lewes Road communities as the Patch, is set to get new play equipment, pathways, fencing and better drainage.

On Monday, work to resurface the ball games area and its two entrance paths will begin, and the park will be closed from March 6 to 10. It will reopen for the weekend, then close again on Monday, March 13.

Work is being co-ordinated with the Friends of William Clarke Park, which has its own programme of works scheduled over the next two months, expected to be completed by Patchfest spring festival on 22nd and 23rd April.

Chair of the environment committee Cllr Gill Mitchell said: “It’s a pleasure to be able to improve a park at a time when budgets are so tight. Getting funding from external sources and the work of these fantastic friends groups will become increasingly important in future.”

Because of cuts in central government funding to councils, the parks department must lose £600,000 of its budget, or 15 per cent, up to 2020.

William Clarke Park is named after a former councillor and railway worker who was mayor of Brighton in 1975. The elongated park is formed from a railway cutting.

It led to a 900-metre tunnel under Elm Grove, serving the Kemp Town branch line, emerging at the bottom of Freshfield Road. The line closed in 1971.