The Pet Shop Boys are to headline Pride this year, their first Pride appearance in 20 years. 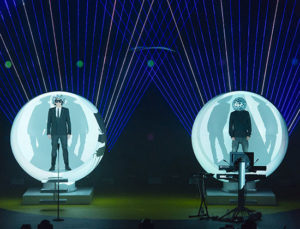 The duo, who were last month awarded the NME award for Godlike Genius, will play in Preston Park on Saturday, 5 August.

Neil Tennant and Chris Lowe will be performing their Super Tour show, from their sellout arena tour.

Paul Kemp, Director of Brighton Pride, said: “We are really proud to welcome the Pet Shop Boys to headline our most fantastic Pride Festival ever. Having worked with some of the world’s most important artists, their impressive history and amazing contribution to popular culture is undeniable. Add to that their community conscience and campaigning, and they are the perfect act for the finale of our Summer Of Love Festival.”

Their latest critically acclaimed album Super released in 2016 reached the top 3 of the UK album chart. Throughout their career the Pet Shop Boys have delivered principle alongside pop, as they continue to campaign and fundraise for the LGBT+ community.