Hundreds of NHS supporters from Brighton and Hove, including student doctors and nurses, went to the national demo in London yesterday (Saturday 4 March).

Sussex Defend the NHS and the GMB both organised travel for the train journey there and back.

In London they tens of thousands of people marching to Parliament Square – with some estimates putting the number at about 250,000. There were no arrests.

The Labour leader Jeremy Corbyn addressed the “Save Our NHS” rally which the organisers said was a protest against austerity cuts and the threat that they pose to patient safety.

Sussex and Brighton Students carried a large banner bearing the message “People before profit” and “Save Our NHS”.

Many of those taking part were critical of the contracting out of services and what one described as “privatisation by stealth”. 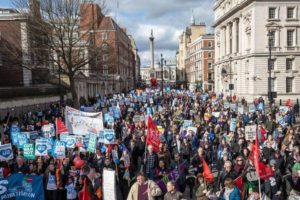 Another target for protesters’ ire was the drawing up of sustainability and transformation plans (STPs), not least because of the secrecy surrounding the process and the lack of democratic oversight.

Again there was widespread suspicion that these were a cover for more fragmentation and privatisation of services as well as possible closures.

One of the most commonly expressed views was that the NHS was at breaking point, with social care needing more cash to help free up hospital beds.

A number of protesters also raised staffing, with the NHS reliant on doctors and nurses from overseas while the government is trying to restrict immigration.

Government ministers have promised more home-grown medics but the bursary for student nurses is being cut. This has been blamed for the drop in applications for nursing degree courses.

Many of the marchers were hoping to put pressure on ministers before the budget on Wednesday (8 March).

In January hundreds of people marched through Brighton for a similar protest.

Public asked to look out for missing Hove girl, 17