US business to pull Staples out of Hove

The American business Hilco is to close the Hove branch of the struggling office stationery company Staples.

Hilco bought the chain’s British stores in November and is ending its high street presence, choosing to focus instead on online sales and business to business. Some branches may be rebranded.

The Hove branch, in Lyon Close, off Davigdor Road, was one of 107 stores included in the Hilco deal which was concluded for a “nominal sum”.

The chain employed about 1,300 staff. It said: “Although Staples will no longer be on the high street, we remain committed to providing great value service and will continue to operate online or by phone.”

When the British arm of Hilco agreed the deal, it said: “The use of the Staples brand will be phased out by the UK retail business over the coming months.” 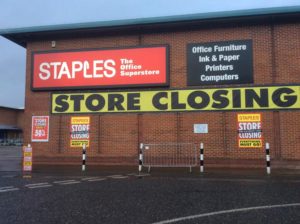 The licence to use the Staples brand is due to expire in May.