Charlotte Dunford had been missing for almost a fortnight after last having been seen in Kingsway, Hove, on Saturday 25 February.

Today the force said: “The missing 17-year-old from Hove went missing on Saturday (25 February) and was found shortly after midnight on Friday (10 March) in Brighton.”

Last Saturday, however, she told concerned friends on Facebook: “Lol I’m not missing like that I’m wanted an didn’t wanna get nicked and ain’t been my hostel so they reported me missing.” 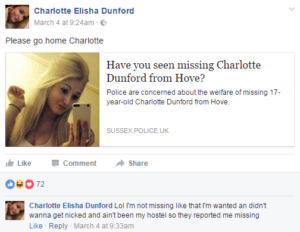