A 51-year-old man from Portslade is likely to be jailed tomorrow (Monday 13 March) for helping a friend dump the body of bomb disposal expert Mark Manning.

Stewart Robertson, of St Aubyns Road, Portslade, is to be sentenced at Lewes Crown Court after being convicted of preventing the lawful burial of Mr Manning, 54, of Lancing.

At the end of a four-week trial at Lewes Crown Court his friend Colin Gale, 40, of Offington Lane, Worthing, was convicted of manslaughter.

Gale killed Mr Manning, a father of two, during a violent row about money that he owed him then hid hid body on land near the Sussex village of Slaugham, near Handcross.

After the trial Mr Manning’s son Kane Manning, 18, said: “My father was a hero. He saved many people’s lives around the world with his mine clearance work.

“I had an amazing bond with my father and I find it hard knowing my dad will never be around to see me grow up. I am so glad that justice has prevailed in the end.” 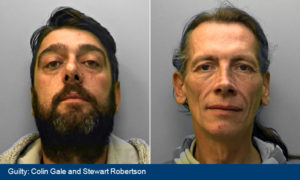 Robertson and Gale are due to be sentenced by Judge Shani Barnes, the honorary recorder of Brighton and Hove.