A dancer who reached global audiences when he starred in a video of him twisting and shouting with a pink-coated pensioner in Brighton has landed a new role in rock band Kasabian’s latest video.

Pablo Woodward, better known as the Disco Bunny, plays an inpatient at the West Pauper Lunatic Asylum in the video for You’re in Love With A Psycho, which is inspired by One Flew Over the Cuckoo’s Nest.

The band’s singer Tom Meighan and guitarist Serge Pizzorno are also joined by comedian and new Bake Off host Noel Fielding and This is England actor Stephen Graham, all of whom play inmates.

Pablo is seen at the beginning of the video in a common room with other inmates, and then at the end taking part in a dance routine in a sports hall. 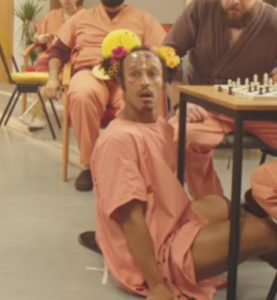 And a warning for more sensitive readers – as well as his trademark grin, viewers also get a generous view of his derriere through the scanty hospital gown’s split down the back.