Labour activists prompted a last-minute change of heart in Brighton Kemptown, persuading a selection panel to pick a local councillor as the party’s general election candidate.

Lloyd Russell-Moyle, 30, will contest the seat on Thursday 8 June after a heated internal debate.

Councillor Russell-Moyle became a member of Brighton and Hove City Council after winning a by-election last year. He previously stood for Labour in Lewes at the 2015 general election.

He said: “I’m delighted to have been selected to fight in Kemptown, the constituency where I had one of my first jobs, in Peacehaven, and where I live, in Kemp Town, and which includes East Brighton, which I represent as a councillor.

“We’re going to fight to have a good strong Labour voice in Westminster to speak for our local hospital which is in special measures and our schools which need proper funding and to replace an MP who has been silent about the things that matter for the past two years.”

The local GMB branch secretary Mark Turner said: “We’re pleased with the decision that Lloyd has been selected. Lloyd is a good candidate and a GMB member.

“We will give every support in securing his election as MP. We believe this is a very winnable seat.”

There were fears among some yesterday (Saturday 29 April) and earlier today that the party would plump for charity chief executive Michelle Thew, 52, from Hove.

One party member said: “She would undoubtedly be a good candidate but, in a seat like this (Brighton Kemptown), we could do with someone who knows the area, the issues and the activists.

“We need someone who can inspire people so we’ve got boots on the ground as quickly as possible.”

There are suggestions that she may be offered the candidacy in Brighton Pavilion.

After nominations closed a discussion took place about drawing up an all-women shortlist for Brighton Kemptown. 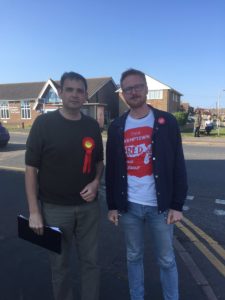 Another party member said: “It’s important to get more women into Parliament – and all-women shortlists are a good way to do it.

“But potential candidates should know whether it’s going to be an all-women list before they apply. You can’t move the goalposts mid-match.”

“I’m a Fellow of the Royal Society of Arts and a non-formal educator.

“Having been raised in Sussex, I went to the local school and college and worked in Lewes and Peacehaven.

“I then studied and worked at University of Bradford followed by a short spell in Brussels and then New York.

Thanks for support today esp from all candidates, we have had a great reception on the door & delighted to be @KemptownLabour's candidate

“I have had a background in co-operative businesses as a director of one of the UK’s oldest Fair Trade cafés, company secretary for a housing co-operative and founder of a bulk-buying food co-operative.