A Brighton bakery has switched to serving coffee in cups that are biodegradable, compostable and 100 per cent recyclable.

Bagelman, with a bakery and four stores in the area, is thought to be the first local food and drink business to make the change.

As part of its eco-friendly approach, it is also offering a discount to people who bring in their own reusable cup.

Chief executive Anthony Prior said: “This is the final step in a process that has seen the business switch all its packaging to biodegradable and compostable over the last 12 months.

“If they do end up in landfill, they break down at the same rate as other biodegradable waste such as paper and food, compared to up to 30 years for a traditional plastic-lined cup.

“The plant-based PLA (polylactic acid) lining in Bagelman’s cups also makes them guaranteed to be recyclable.

“Most traditional paper coffee cups are laminated with a substance called polyacetylene, making them watertight and coffee-proof but very difficult to recycle.

“Even if you drop them in a recycling bin, chances are they never reach the paper mills due to the difficulty of separating the paper from the plastic coating.”

Mr Prior said that for the past few years, he and his wife Jo, along with their dedicated staff team, had been working tirelessly to make the business as sustainable as possible.

He said: “Coffee is a major part of the business. All our coffee beans are ethical and better than fair trade as they are sourced directly from the farmers who get a better return on their hard work. This helps them to cope with the many challenges they face, including the effects of climate change.

“It made sense for us to complete the circle by serving ethical coffee in ethical cups. So that’s what we’ve done. 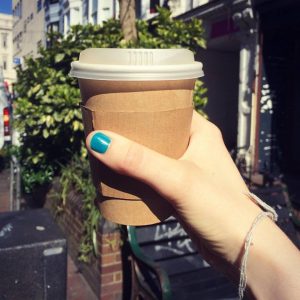 “It’s more of challenge than people might think, to make the scale of change we’re attempting without putting the business under too much pressure.

“We employ nearly 60 people and have created 25 jobs in the last two years. That’s 60 livelihoods we’re responsible for, so lots of thought goes into every decision we make, especially as we’re often squeezing the profits.

“But we’ve got a great team of people at Bagelman and everyone’s on board. We couldn’t do it without them. I hope they all know how much we appreciate the extra effort they go to adapting to the almost constant changes.”

Jo Prior, who is also a director of the business, said: “This is just the latest in a series of initiatives we’ve taken to make the business as green and ethical as possible.

“We’re phasing out zero hours contracts, increasing the plant-based options on our menu, tackling food waste with our new beer Optimist made from waste bagels, supporting Pay It Forward providing hot food and drinks for the homeless and talking to green energy providers. 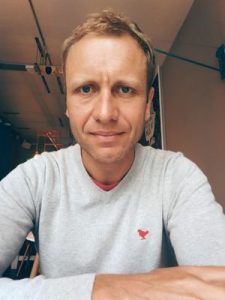 “There’s loads more I could mention and loads more work to be done. We know that. But we’re on a journey and there’s no turning back.

“Biodegradable coffee cups work better for the environment than a tax on traditional plastic-lined cups and I’d like to encourage all Brighton coffee shops to start using them.

“Brighton is a very switched on place where you can buy ethical coffee almost everywhere, whether you’re having a haircut or buying a book.

“It would make a massive impact if all that ethical coffee was also going into eco-friendly cups.

“It’s true the cups are slightly more expensive and in such a competitive market that cost can’t be passed on to the customer. It has to be absorbed by the business. But it’s well worth it in my opinion.”

Operations manager Lyn Tyler said: “It’s even better when people don’t use a takeaway cup at all so we’re introducing a discount for people who order a coffee from us and ask us to put it in their own reusable cup.

“This way nothing ends up as waste at all and our customers save a little bit every time they buy their coffee.”