Another Brighton pub put up for sale

Another Brighton pub has been put up for sale by the debt-laden pub company Enterprise Inns.

The pub has faced a number of challenges in recent years, including several changes of management and a noise abatement order issued by Brighton and Hove City Council.

The council said: “Any new owner or occupier would not inherit or have liability for the abatement notice served previously.”

EI, which describes itself as the “leading leased and tenanted pub business in the UK with a portfolio of over 5,000 pubs”, has sold other pubs in Brighton in the past few years.

The company has sold the Horse and Groom, the Albion Inn, the Cuthbert, London Unity and Rose Hill Tavern in the past five years.

It has previously said that it was rationalising its estate after changes to the law governing the beer tie – the contract obliging pubs to sell the owners’ drinks.

But the company also has debt of more than £2 billion and has also said that it wants to focus on its most lucrative properties.

The future use of the Greys building is uncertain. Two previous Enterprise pubs – the London Unity and the Albion Inn – have both been turned into houses.

The Horse and Groom and the Rose Hill Tavern have been taken over by independents. The Cuthbert, meanwhile, remains vacant pending planning permission. Applications to turn it into homes were refused in both 2014 and 2015.

The Greys has recently joined the list of pubs held by the council to be assets of community value in Brighton and Hove. The list includes the Rose Hill Tavern, the Cuthbert and the Horse and Groom.

The Greys was deemed to be an asset of community value in February. But it is not known whether any community groups have expressed an interest in buying the pub from EI. 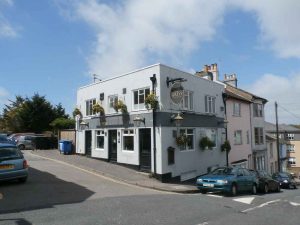 Six weeks ago the company published its interim financial results for the six months to Friday 31 March.

Pre-tax profits fell from £40 million in the same six-month period a year earlier to £13 million, with £30 million set aside to refinance the company’s corporate bonds.

Fleurets, which is handling the sale, said: “The Greys is an award-winning pub occupying a corner site in the Hanover residential district of Brighton city centre.

“The London Road commercial district and the main city centre all lie within easy reach and a large recently constructed students’ hall of residence is located close by.

“This is a one-bar operation with a contemporary trade area and a well-equipped trade kitchen.

“Historically the pub has had an excellent reputation for good quality food and for the live music offering, featuring acts from all over the world.”