The event was particularly popular with families – and parents and their children queued for a chance to sit in a fire engine. 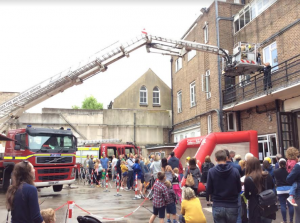 Firefighters show off the aerial ladder platform, carrying out a rescue at the Preston Circus Fire Station open day

The event was officially opened by the mayor of Brighton and Hove Councillor Mo Marsh – just yards from a café called Moe’s at the Circus.

There were demonstrations including a flaming example of what happens if water is poured on a chip pan on fire. 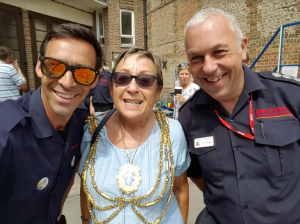 And one of the three aerial ladder platforms used by East Sussex Fire and Rescue Service was on hand to carry out a mock rescue.

Crew members from the fire station at Roedean, in Brighton, and from Hove joined the fun.