A man has been jailed for drug dealing in Brighton after going on the run when he was bailed earlier this year.

His name, his aliases and photograph were widely publicised by the media after Sussex Police issued a public appeal to find him.

At Lewes Crown Court on Monday (20 November) he was jailed by Judge Charles Kemp for conspiracy to supply heroin and crack cocaine in Brighton and Hove.

The 27-year-old dealer, of no fixed address, pleaded guilty in October to conspiring to supply class A drugs in Brighton between dates in September last year and March this year.

He was described as a “cuckoo” who takes over the home of someone vulnerable, often an addict, to use as a base for dealing and a place to hide his drugs.

The police have been working with Brighton and Hove City Council to tackle the growing number of drug dealing cuckoos in the area.

Sussex Police said: “He was among 75 arrests made during a six-month operation carried out by officers from Brighton and Hove police’s Community Investigation Team into the supply of drugs into the city.

Judge Kemp told him: “You and five others were six conspirators to supply class A drugs.

“You ran the ‘Diggy’ drugs line from a distance and were responsible for sourcing the drugs from outside Brighton, preparing them for street sales, answering phones, taking orders and sending out the runners.

“Your DNA was on the packing of several transactions.”

Sussex Police said: “Padodou John failed to answer his police bail in March this year after he had been arrested and went on the run. 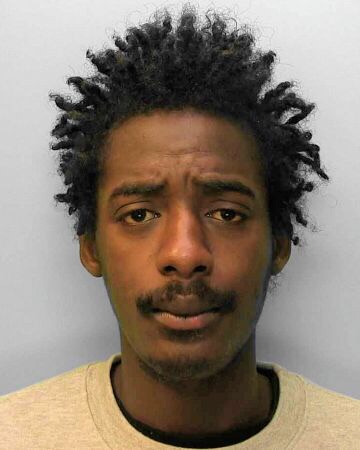 “An appeal was issued by the force on its website to help find him and, following a call to police from a member of the public about his location, John was traced and arrested at an address in Portslade on (Friday) 1 September.”

Detective Constable Jon Freeman said: “I want to thank everyone that contacted us in response to the public and media appeal about Padodou John. The information provided helped us find and arrest him.”

Kevin Hume, 47, of no fixed address, was also sentenced on Monday (20 November) to two years in prison, suspended for two years, and given a six-month drug rehabilitation order for supply crack cocaine in October last year. He admitted the charge.

Detective Inspector Julie Wakeford said: “This group were not only profiting from supplying heroin and crack cocaine in the city, they were also exploiting vulnerable residents by using their addresses as locations from which to deal and hide their drugs.

“This is something we are seeing more and more with dealers from out of town taking over addresses in Brighton and Hove.

“They target residents who often struggle with addictions but who are also vulnerable for many other reasons.

“We encourage anyone who has any information about drug dealing or concerns about any resident being exploited to contact us.”