Hove seafront council offices to be turned back into homes

The council’s former HQ on Hove seafront is to be turned back into housing with plans going on show next month. 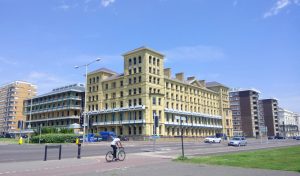 The developer, Mortar Nova Grand Avenue, is due to share its vision at a public consultation exhibition on Friday 26 January and Saturday 27 January.

The company bought King’s House from Brighton and Hove City Council in October for £26.125 million.

The money was spent in part by the council on refurbishing Hove Town Hall, with hundreds of staff moved to newly created office space there with no loss of jobs.

The move saved £2 million a year in running costs and, the council said, was invested in better customer services for residents while reducing their carbon emissions by 27 per cent.

Mortar Nova Grand Avenue director Alan Coleman said: “We are proposing to restore King’s House to its former glory, refurbishing the grade II listed building and reintroducing some of its original external features, including changing its use back to its original intention, which is residential homes.

“We are also proposing a high-quality new building in place of the 1980s extension and we are keen to hear local people’s views on our draft plans which will be ready to view in January.”

The original five-storey building, facing the seafront, was built in 1870 as a series of terraces that were joined together to form the Princes Hotel.

It became HMS Lizard during the Second World War when it was used to for shore-based training by 50,000 servicemen.

After the war the building was bought by the South Eastern Electricity Board (Seeboard) and converted into offices.

Seeboard has since been bought by the French energy firm EDF which still has offices in Portland Road, Hove.

The electricity company extensively refurbished King’s House and added an underground car park as well as a controversial four-storey rear extension in the 1980s.

After Seeboard moved out in the late 1980s the building remained empty until the council moved in in the 1990s and gave the building another makeover.

The public exhibition is due to take place at the Cornerstone Community Centre, at St John’s Church, in Hove, on the corner of First Avenue and Church Road, close to Palmeira Square.