The Greens have chosen a digital marketer to stand in the East Brighton by-election which is expected to be called in the next few weeks. 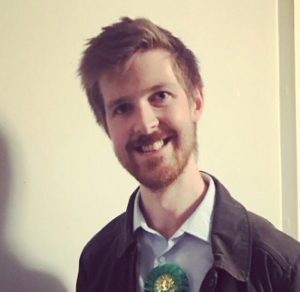 Councillor Lloyd Russell-Moyle said that he intends to step down from Brighton and Hove City Council after Christmas or early in the new year.

The Labour councillor was elected to the House of Commons as the MP for Brighton Kemptown at the general election in June.

The by-election is likely to be held on Thursday 1 February or Thursday 8 February.

The Greens said: “The Brighton and Hove Green Party has selected Ed Baker as its candidate for the upcoming East Brighton by-election, likely to be held in spring 2018.

“It is taking place as a result of Lloyd Russell-Moyle MP standing down as councillor.

“Ed Baker lives in the ward and works in digital marketing. He is also a musician, and active in the community on behalf of local organisations.”

He said: “I’ve always been passionate about making a difference whether that’s through volunteering for the Kemp Town Carnival or running the Brighton Marathon for Allsorts Youth Project who support our LGBTU young people.

“Now, as I see food banks appearing across Brighton and Hove and the number of rough sleepers doubling in a year, I feel it’s time to step up for my local community.

“Only the Green Party is really taking the fight to the other political parties on the council which are both wedded to cuts and austerity.

“Not enough is being done by the Labour-run council to make our beautiful city more hopeful, ambitious and truly equal.

“As a local resident myself, if elected as a councillor, I will work tirelessly for local people and put them first.”