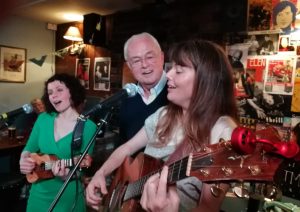 The charismatic Greys pub in Southover Street, in Hanover, hosted a most intimate and unique evening of Christmas festivities.

This was the first time that such an event has taken place and I for one pray that this will become an annual event of warmth and festive Yuletide.

This special evening was entitled The Lewis Family Christmas Hour – although it actually ran for double that length.

It was organised by acoustic music promoter and local singer and songwriter Sylvie Lewis. 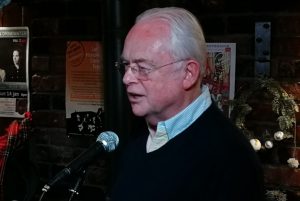 Thankfully, she was easily able to talk her famous father, BBC journalist and newsreader Sir Martyn Lewis, into sharing his party piece of an abridged version of the much-loved Dylan Thomas poem A Child’s Christmas in Wales.

And he recounted some rather interesting and highly amusing political stories from his long and successful career.

It turns out that Sir Martyn’s father went to school with Thomas in Swansea around a century ago and by all accounts Thomas was then an undistinguished pupil that had not yet flourished.

Sir Martyn, 72, was also born in Swansea. He is probably most famed for his coverage of the sad and untimely death of Lady Diana, Princess of Wales. 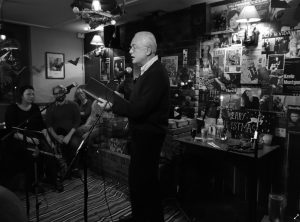 This evening he was accompanied by both of his charming daughters – Kate, who works in the film industry, who read a poem, and singer and songwriter Sylvie.

The girls’ late mother Liz had an interesting father, Duncan Carse, who was not only a polar explorer but also known for his portrayal of Dick Barton Special Agent on BBC Radio.

Also appearing this evening was Sharon Lewis, who although she shares the same surname is actually no relation.

Sharon – one half of the folk duo Pooka – teamed up with Sylvie Lewis for the first time to perform as the Lewis Sisters. 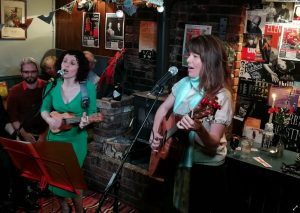 The Lewis Sisters at the Greys pub in Brighton

The ladies’ beautiful harmonies complemented each other as they treated the fortunate souls present to renditions of popular seasonal compositions including Judy Garland’s Have Yourself A Merry Little Christmas and the 200-year-old classic Austrian Christmas carol Silent Night, for which Sir Martyn admirably accompanied the girls on vocals – fireside favourites and Lewis carols indeed!

The setting was perfect as the performers and at times the crowd were singing by the log burner and thus spreading warmth inside as well as outside and all of this for a great cause of trying to save the pub for prosperity and thus create a community freehouse in the heart of Hanover.

To find out how to support the plan for a community buyout and to own a share in this iconic pub, visit http://www.savethegreys.co.uk/ or   https://www.facebook.com/SaveTheGreysPub and for more information on Sharon Lewis, go to http://www.sharonlewis.net/. 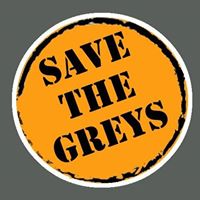 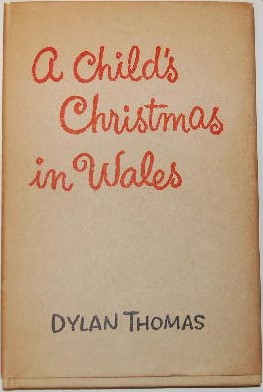