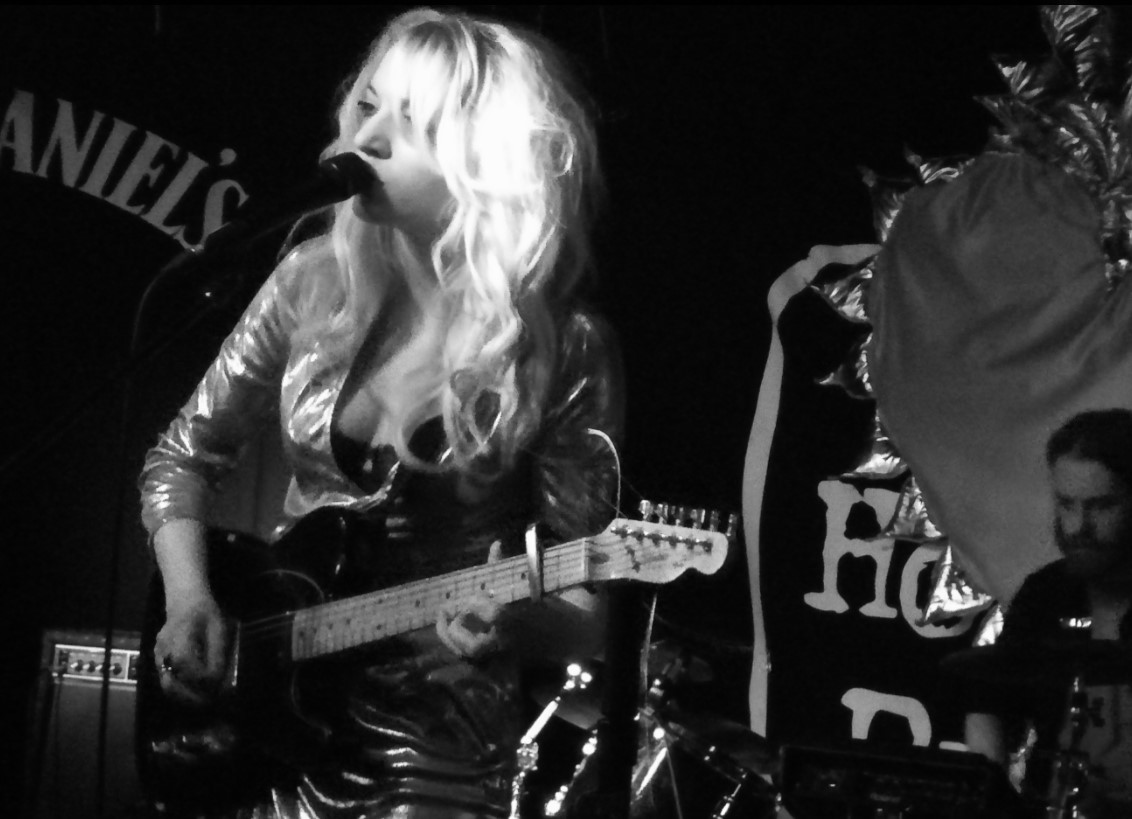 Hats off to Andy Rossiter, the boss of Brighton’s very own Love Thy Neighbour independent label, for organising such a great three night mini-festival at the Hope & Ruin. This is only the second year that the event has taken place and I for one believe that this will run and run for many years to come, based on the music quality.

My colleague and I have been keeping a close eye on the promotion work for this event and it has been absolutely spot on. Not only has Andy collected the budding local talented acts together and put them on stage to spread the word, he has also produced three limited edition 10” lathe cut clear vinyl releases as a celebration and thus offering the punter the complete package. There are a mere 20 discs available for each night, thus instantly becoming highly collectable I would suggest.

The event is titled ‘Triptych’ (which means ‘A set of three associated artistic, literary, or musical works intended to be appreciated together’) and I would suggest that this is the perfect title to what Andy is trying to achieve. A cohesive package of three like-minded acts per night, set across three consecutive nights. 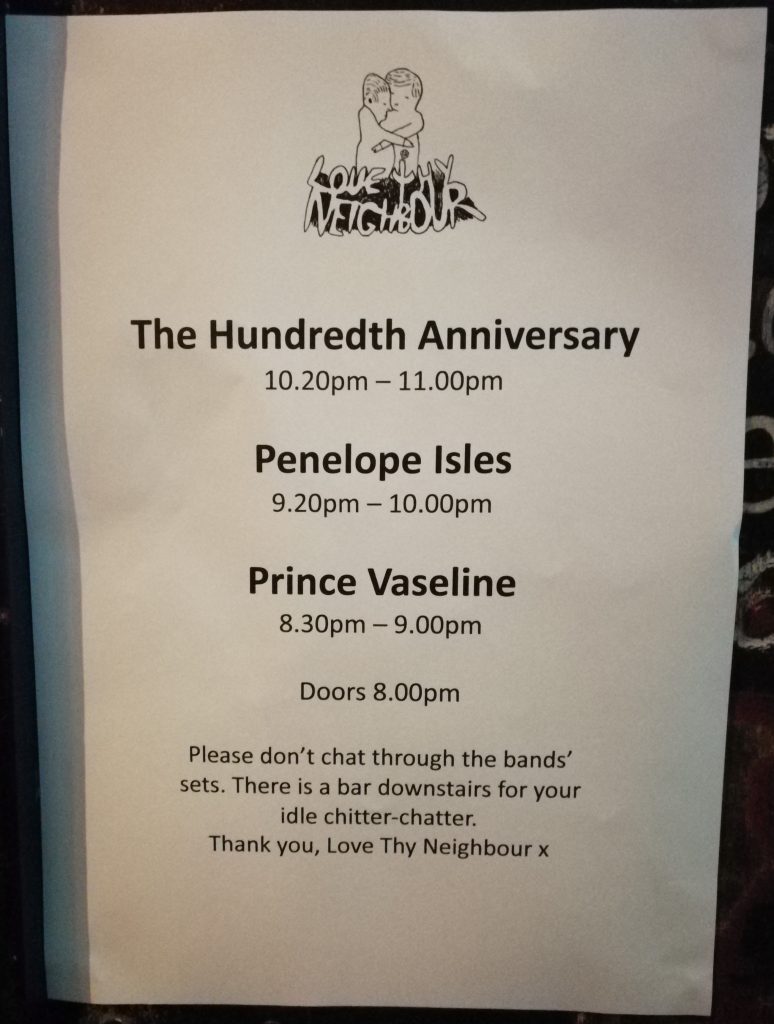 First up were Prince Vaseline, who actually write their name without capitals, thus prince vaseline. They are the female-male duo of Snowy and Max and they are signed to the Love Thy Neighbour label. Their pleasant 7 song set took the audience on a varied journey, initially with Moog and Roland keyboards with accompanying guitar and then both members on synths and a drum machine. 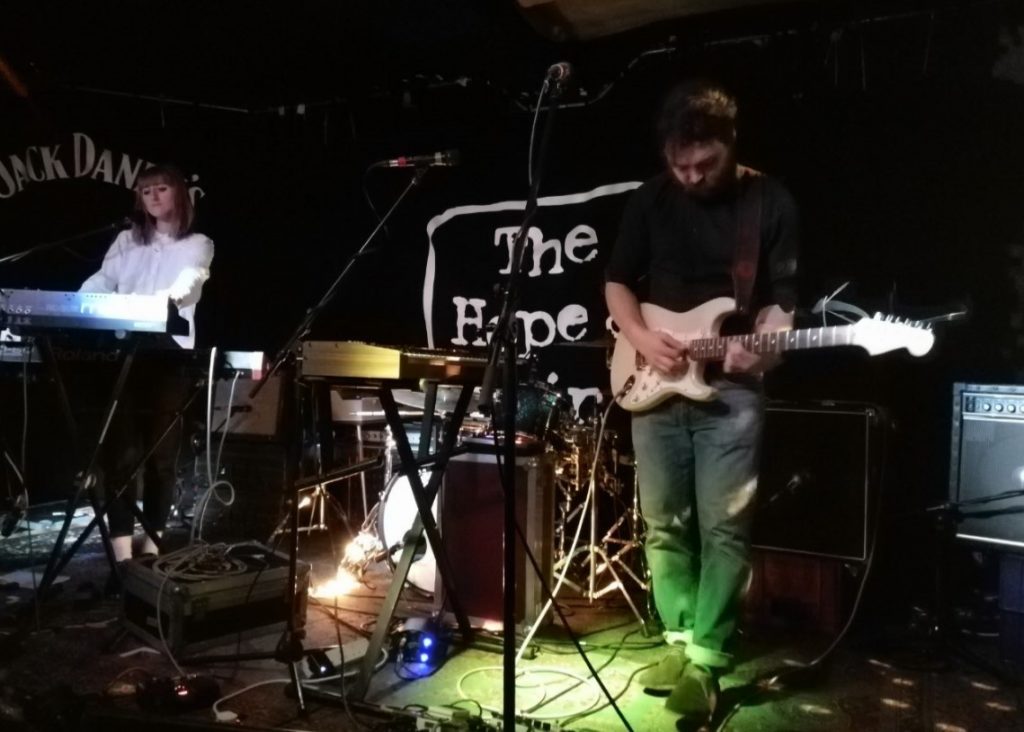 Depending on which composition we were offered, their comparison to other artists shifted. Initially I got a feeling of the Cocteau Twins, followed by the legendary Suicide and then we were onto the sadly missed Broadcast. I picked up on the vibe that certain songs could have easily fitted on the seminal Some Bizarre Album from 1981 or in fact be early works by OMD. Last November saw the guys release their new five-track EP ‘The World of Leaf Moon’ and they performed the opening two numbers for us at the Hope & Ruin. 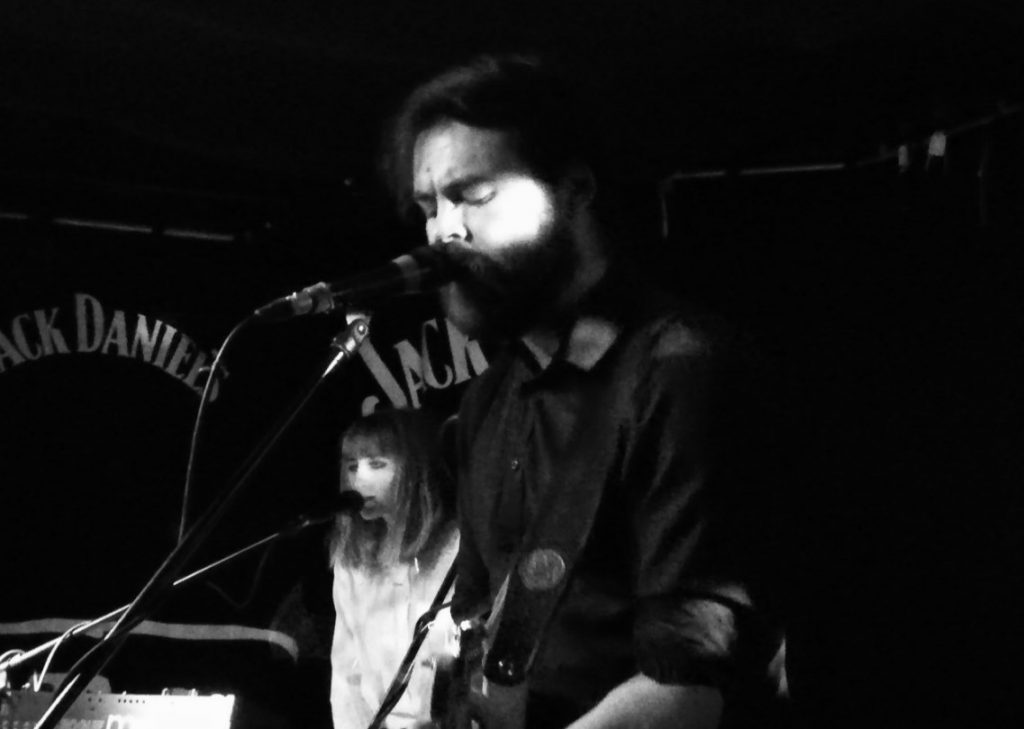 Check their sounds out here:https://princevaseline.bandcamp.com/

It was the turn of the Penelope Isles next, who I believe are out of the Isle of Man but are based in Brighton and Cornwall. In fact my colleague spotted the sticker of Saint Piran’s Flag (the flag of Cornwall) on the drumset. The lineup is made up of siblings Jack and Lily Wolter, with the help of friends Becky Redford and Jack Sowton. 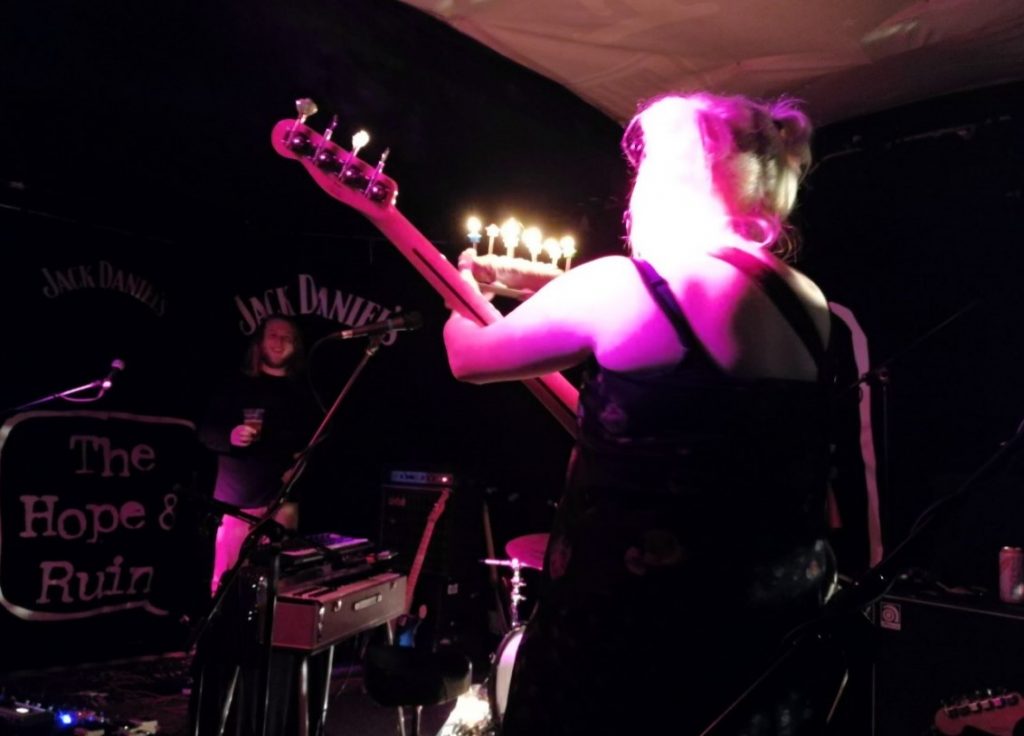 Their lo-fi melodic 7 song set also carried elements of differing styles, namely a mellow start in the vain of Slowdive, then sounding like Turin Brakes, and their decent ‘Cut Your Hair’ (with Becky’s great echoey guitarwork) sounding not out of place possibly in an Inspiral Carpets set. Then we picked up on the dreampop elements of The Cardigans and the awesome finale, the as yet unreleased ‘Gnarbone’ was just like an uplifting Stereolab tune – listen to it here: https://www.youtube.com/watch?v=56sVmQMGXsI (Packed bedroom eh Jack?)

Lily’s organ-work throughout the set also had elements of Nico in there too. But having said that, the band still have their very own distinctive sound. Once again, another band that we would like to revisit live. The Penelope Isles setlist reads: ‘Airport’, ‘3’, ‘Chlorine’, ‘Cut Your Hair’, ‘Bad Head’, ‘Not Talking’, ‘Gnarbone’. 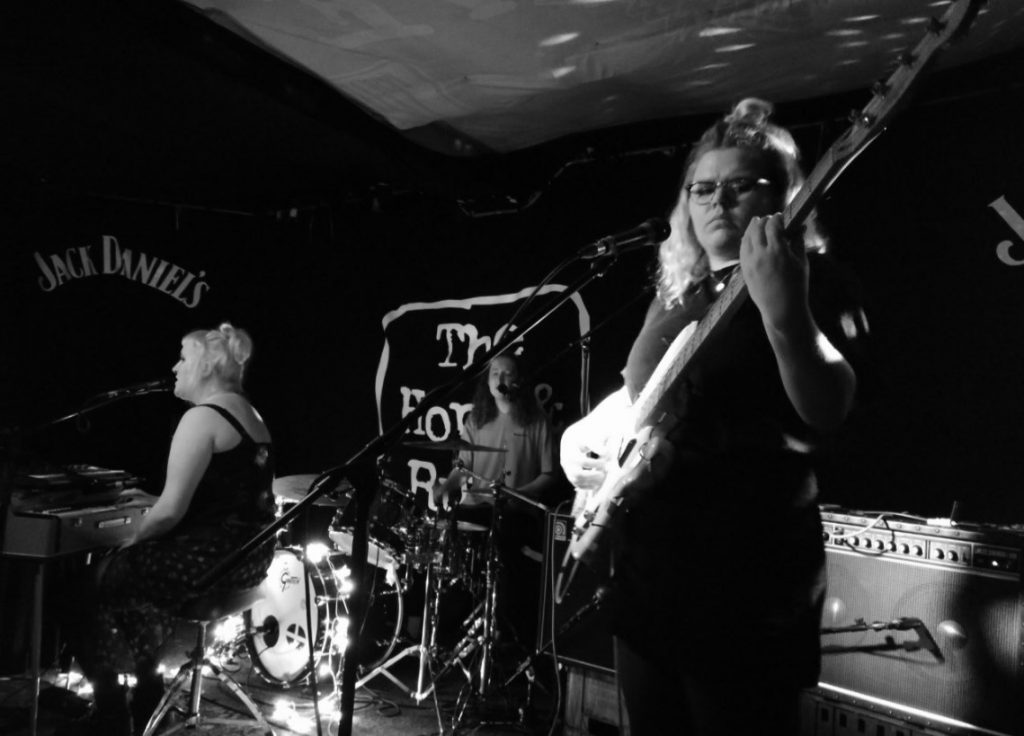 If you missed Penelope Isles, then worry not my friends, as they have just announced a forthcoming gig at the Green Door Store on Wednesday 11th April.

You can hear the Penelope Isles sound here: https://penelopeisles.bandcamp.com/

Head of the bill on Day 1 was Brighton’s The Hundredth Anniversary, who formed in 2012 and are Eleanor, Dem and Chris. However, tonight was Chris’ final appearance with the band. I wonder who they will replace him with? Could it be the young goth-girl called Robyn that filled in for Chris at the Alternate Great Escape gig at St Mary’s Church in 2017, when we first saw them play or possibly someone else closer to home! All will be revealed very soon by the band. 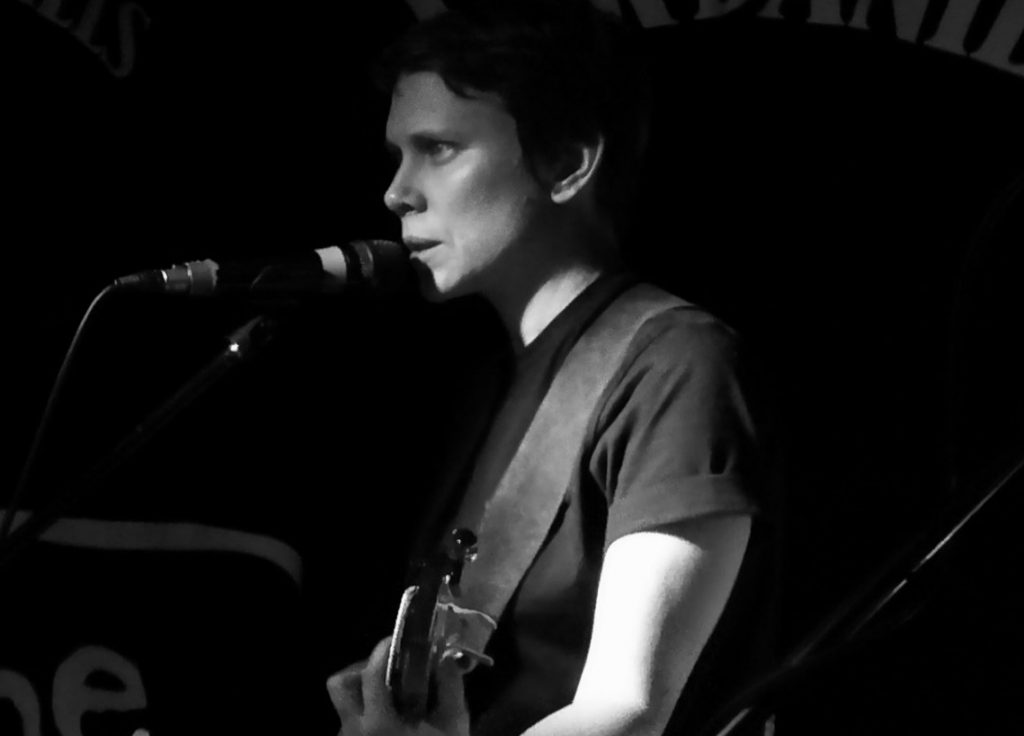 The Hundredth Anniversary live at the Hope & Ruin, Brighton 25.1.18

The band have been twice named in NME’s ‘Ones to Watch’ and their compact nine-track album ‘Sea State Pictures’ was named as one of the albums of 2017 by Drowned in Sound plus they have also shared the bill with Wolf Alice.

Their nine song set allowed me to get absorbed into their world of dreamy vocals and bright indie guitar and rigorous drum work, not that too dissimilar to The Cranberries and The Sundays meets the Cocteau Twins (again!). 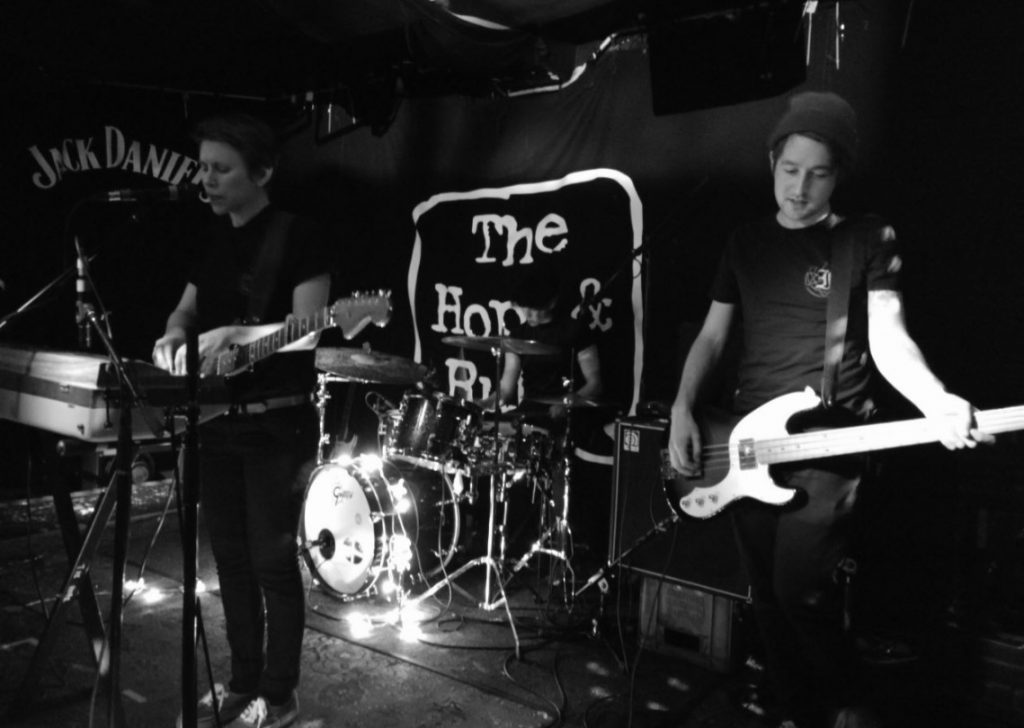 The Hundredth Anniversary live at the Hope & Ruin, Brighton 25.1.18

I particularly like their track ‘Knife’ as it reminds me of the timeless eye-wateringly beautiful Jerry Burns song ‘Pale Red’. The final song of the evening can be found on the special EP, the track being’ Dear Life’ and this sounds a bit like The Cure. Check out the 3 artist tracks on the very limited clear 10” vinyl here: https://lovethyneighbour.bandcamp.com/album/triiptych-one 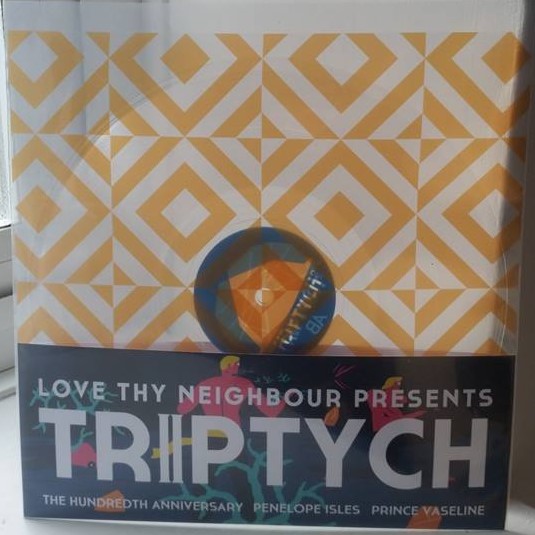 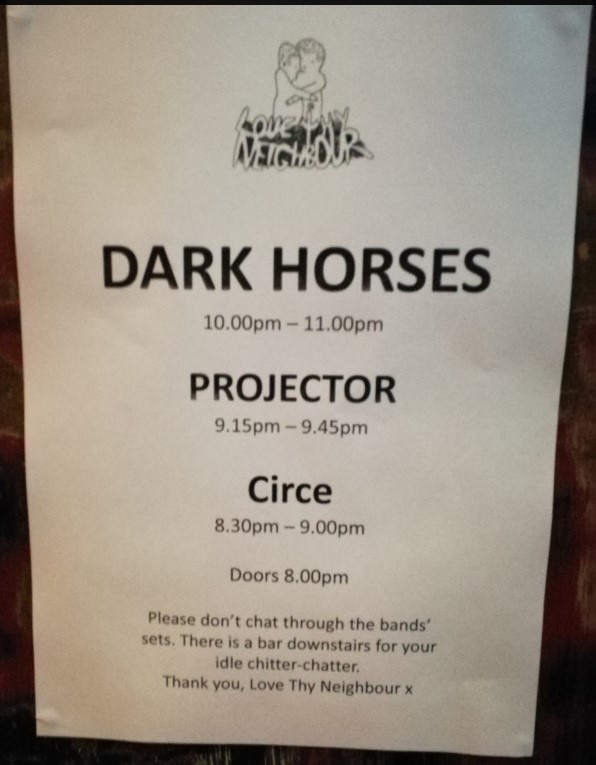 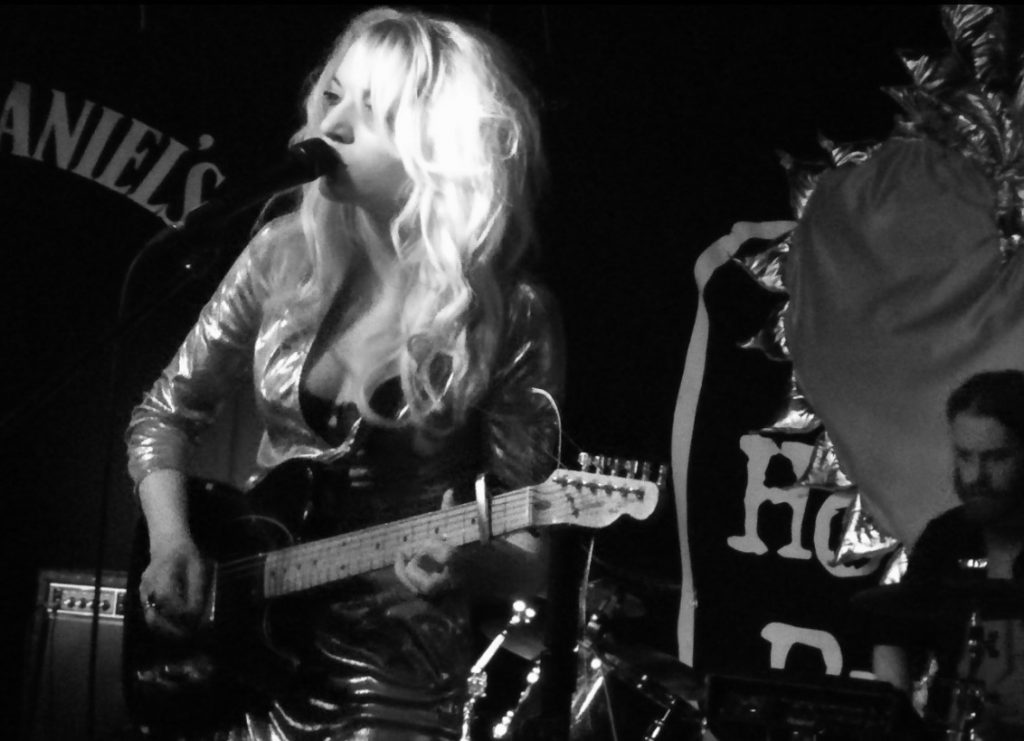 Their otherworldly dark synth laden tunes in the mould of Tubeway Army’s ‘Down In The Park’ are extremely good indeed. Their ‘Under My Skin’ composition features on the translucent T2 10” for the event. Their all too short 5 song set  was closed with their 2017 ‘Blood And Wine’ release. The ideal purchases for any Goldfrapp and Fox fans! The Circe setlist reads: ‘Preaching’, ‘Under My Skin’, ‘I Don’t Wanna Die Here’, ‘Barely Breathing’, .Blood And Wine’. 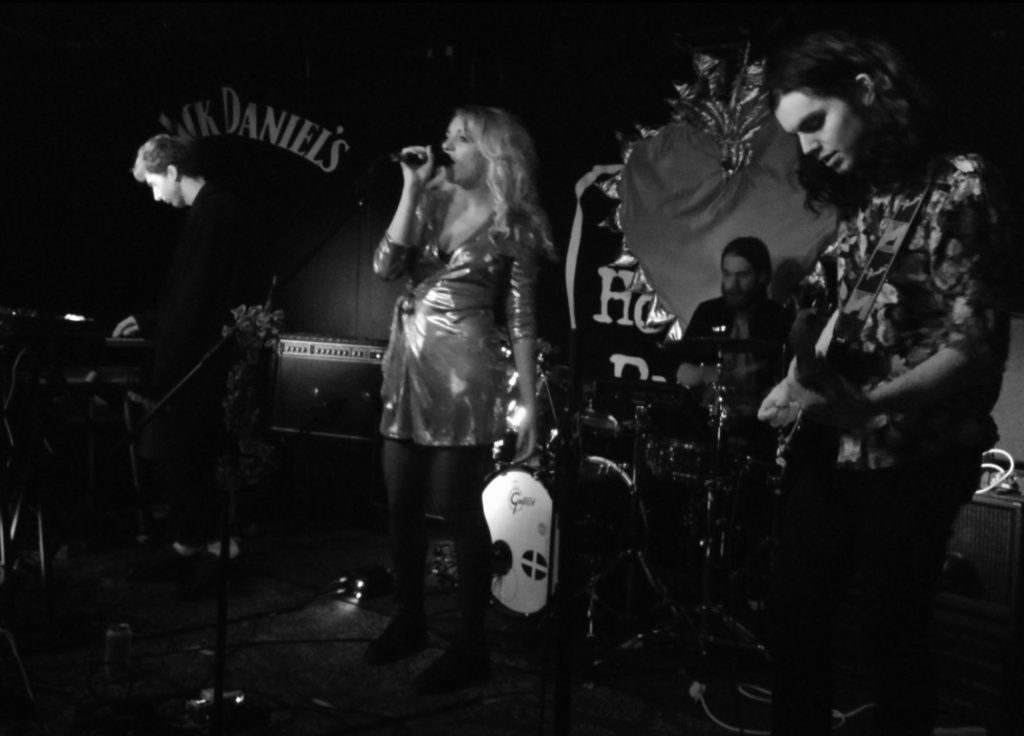 Locally in Brighton, you can next check them out at the Prince Albert on Monday 12th February (with other local acts Hanya, Tuval, Olivia May Green) and then their first ever headline gig will be at Sticky Mike’s Frog Bar on Thursday 8th March.

Next on stage were Projector. However, you wouldn’t have known it, as for their first song ‘Death March’ the lighting guy didn’t bother with any lighting, however being called ‘Death March’ it seems rather apt. 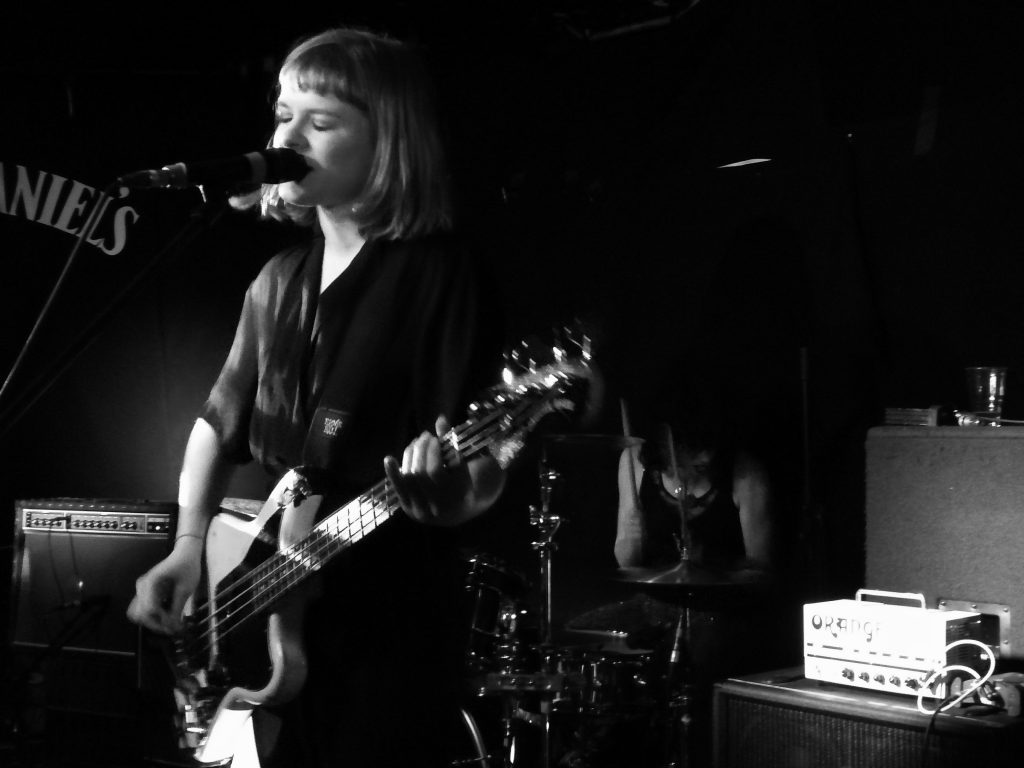 Indie rock post-punk noisemakers Projector are Lucy on bass and vocals, Demelza on drums and Edward on guitar and vocals. Demelza aka Dem looked strangely familiar to me and then it hit me when she stood up in between tracks, she is also the drummer in The Hundredth Anniversary, who performed on Day 1. I must say that her slogging drumming style on Day 2 (a la early Stephen Morris) was vastly different to the previous night and thus shows how talented she is.

If you are fans of BlackWaters, Nirvana, My Bloody Valentine, Joy Division and possibly the Rolling Stones, then Projector are for you. Lucy’s often bellowing vocals sure kept the crowd captivated and Ed’s vocals on the more mellow ‘Dreaming’ somehow complimented this. However, they saved their best for last in the form of ‘Love’, with Lucy going the whole rock’n’roll anarchy thing by throwing her bass right across the stage at the end! Yep, need to see these guys live again, so going to try and see them on Thursday 22nd February at the Green Door Store with Glum, Ragweed and Five Kites. 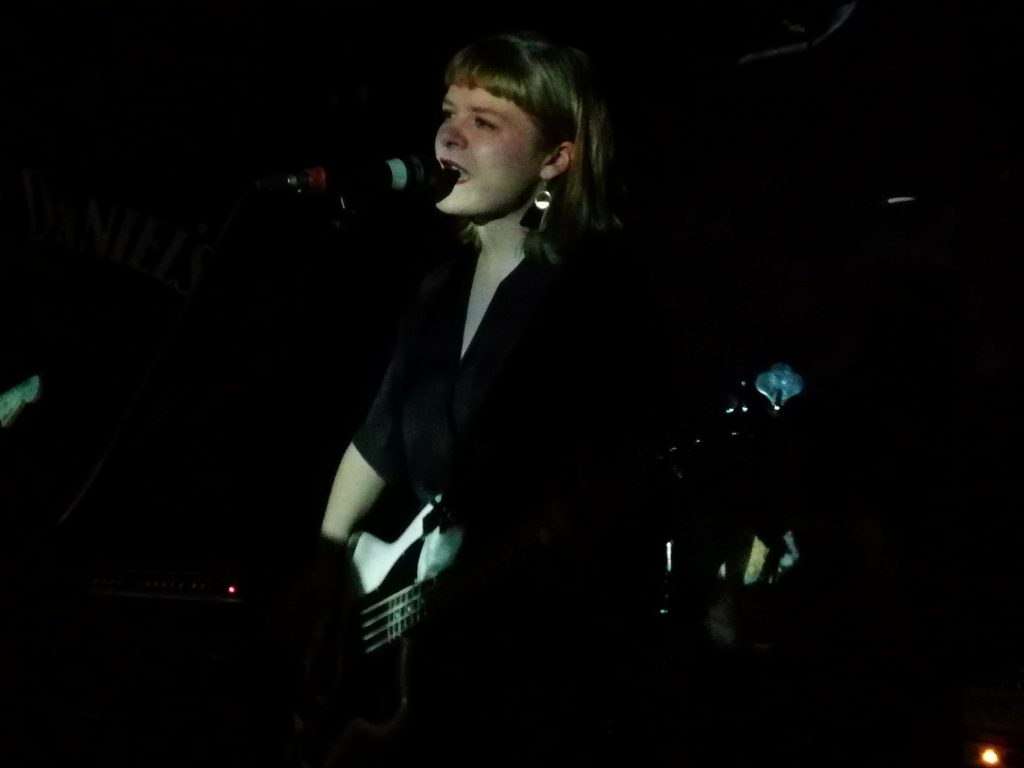 You can check Projector out here: https://projectormusic.bandcamp.com/ 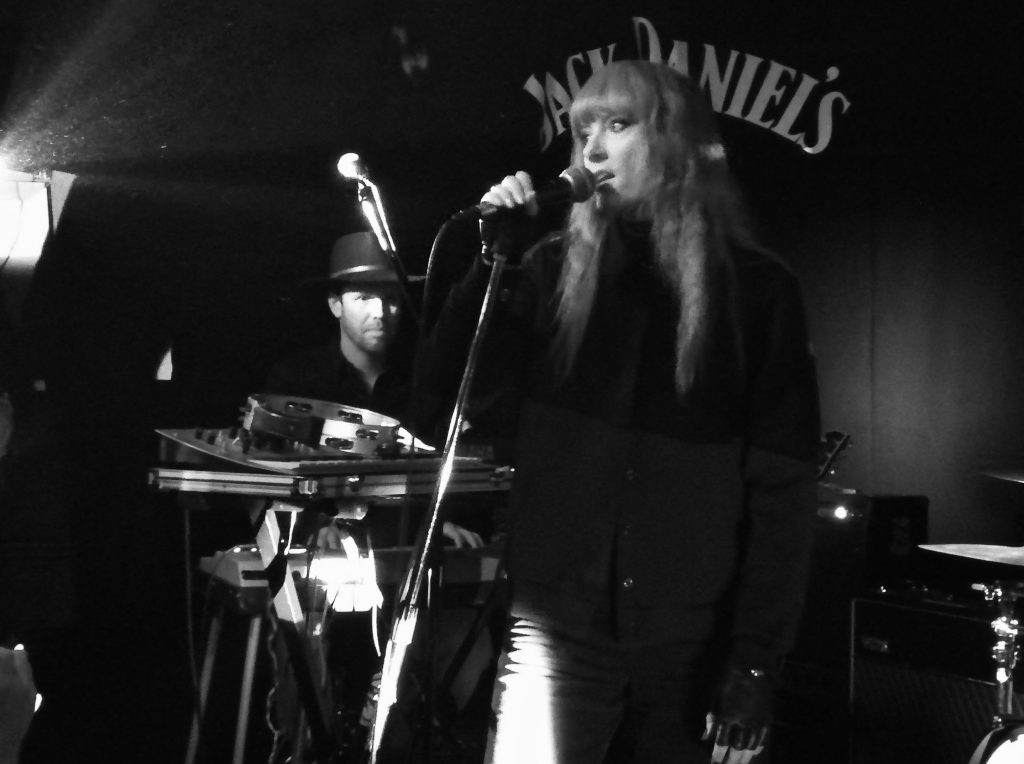 These guys blend psychedelic rock like that of PAUW and The Doors, with elements of Electronica like Stereolab, with a dash of pre/early punk like The Modern Lovers track ‘Roadrunner’. They have been around for a handful of years now and they are really rather accomplished musicians. This is something that drew the attention of Artrocker as the Dark Horses track ‘Radio’ was their single of the year in 2014.

We were treated to an initial 9 song set and then we had two others for an encore, including their cover of ‘Hello, I Love You’ by The Doors. However, for me personally, the standout tracks on the night were ‘Sevens’ new release ‘XIII’ and especially the repetitive beat of ‘Saturn Returns’. 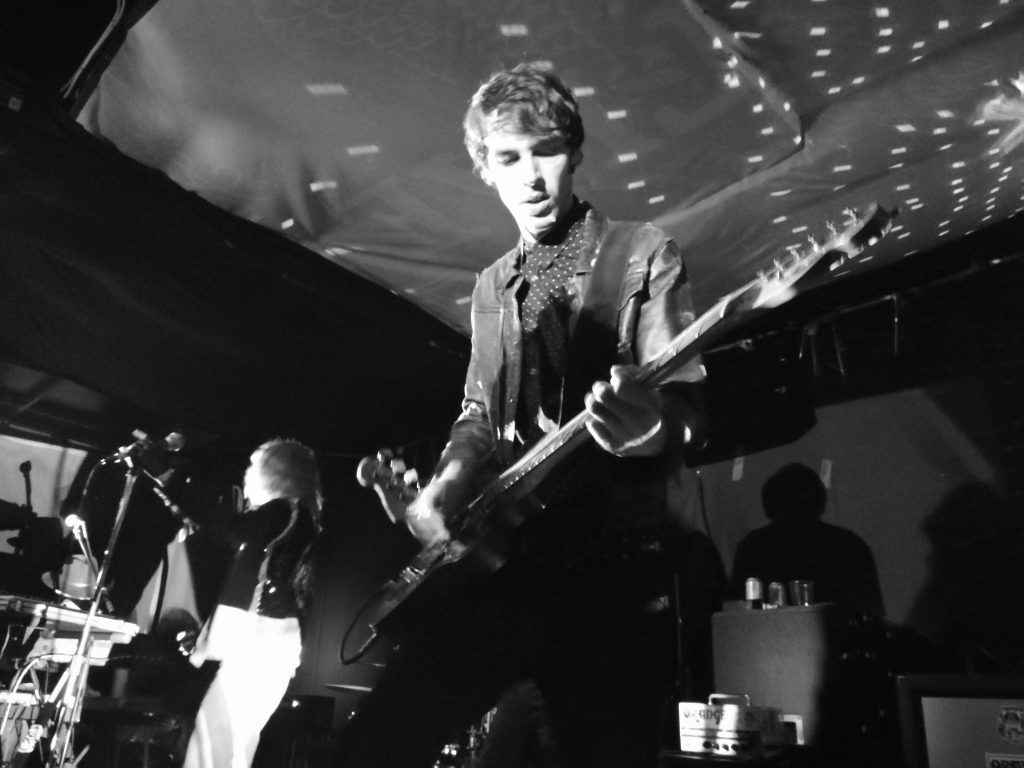 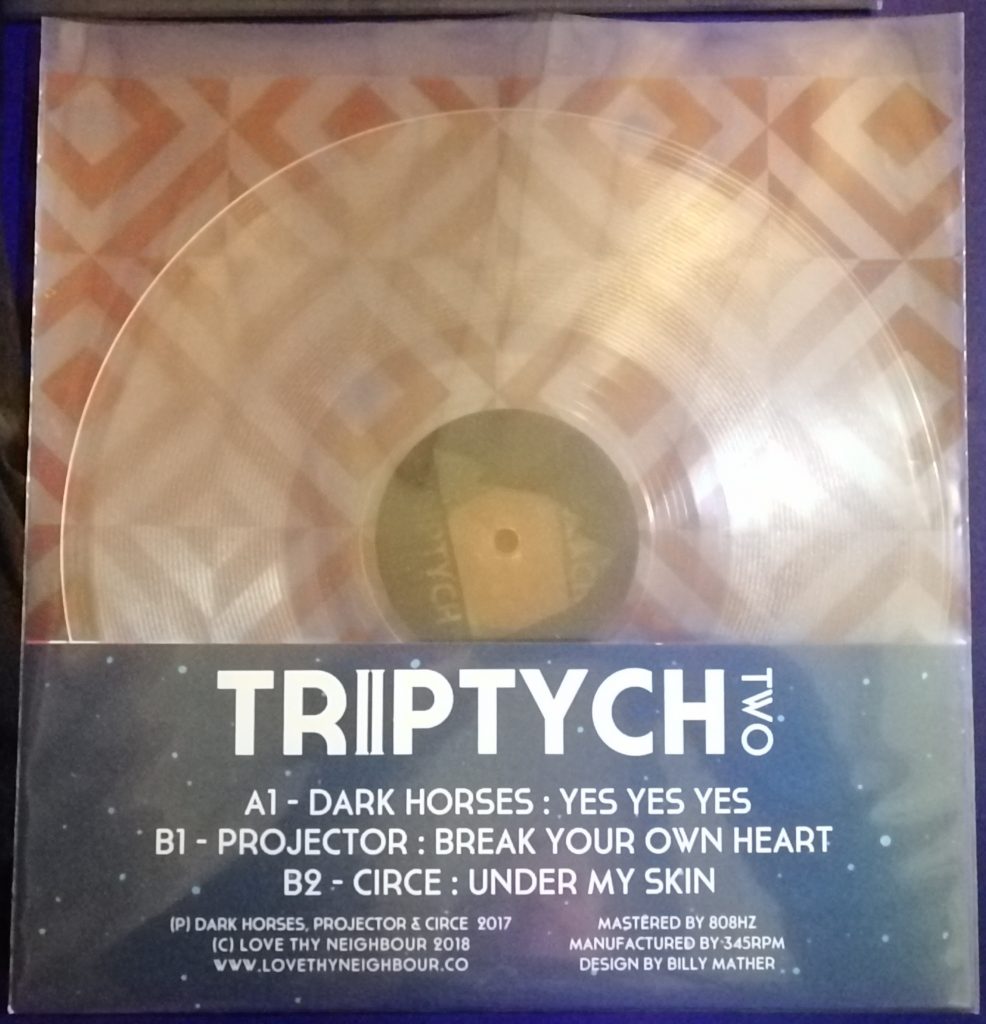 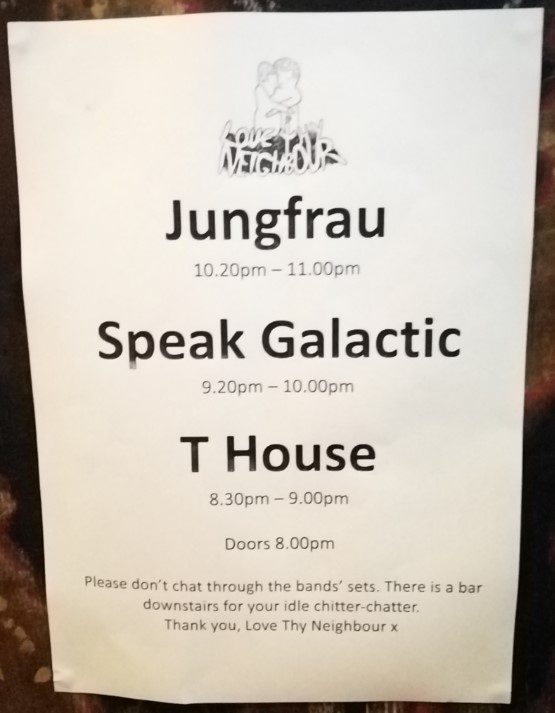 Opening act for the final day was T House who brought his dark and claustrophobic sounds to Brighton. T House is the founding member of highly regarded noise-rock band Sweet Williams and prior to that the much celebrated underground post hardcore/rock act Charlottefield. 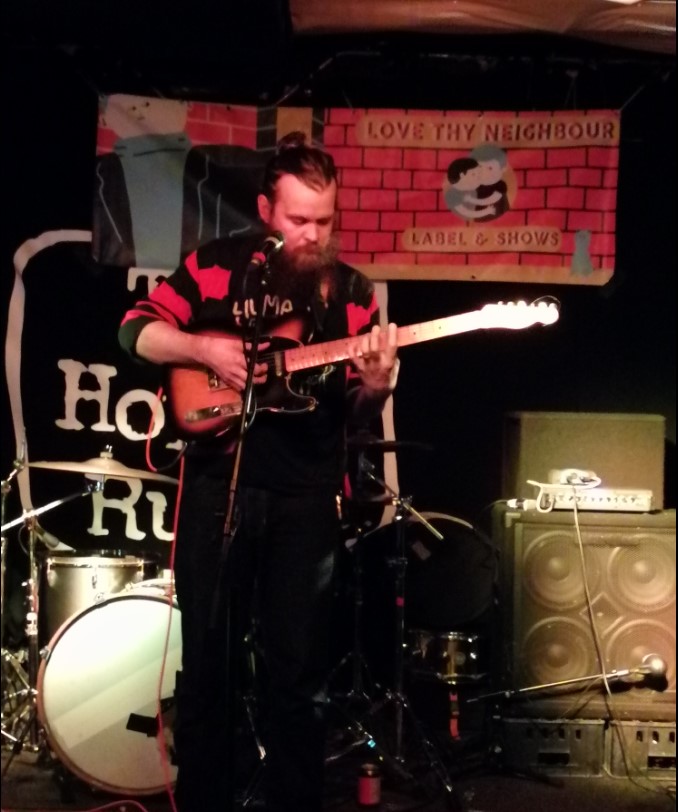 His second track of his set was entitled ‘Blue Horse’ from the T3 release and his final track was called ‘All She Wore’. My colleague referred to the performance as soporific and so we will leave it there.

The latest T House release can be found here: https://endless-records.bandcamp.com/album/the-secret-arrows

T House was followed by Speak Galactic, who are a psychedelic ambient pop trio based in Brighton and are regarded as one of the city’s finest bands. Featuring Owen Thomas (who is also in Merlin Tonto and is also Japanese Sweets), Jim Morrison and Alex Painter of Great Pagans fame. The guys rarely perform live, but got together for Triptych and have now released their first music ‘Truth Tables’ on T3 10” since their ‘Vasovagal Response’ on Cupboard Music’s ‘Taster’ sampler in 2014! 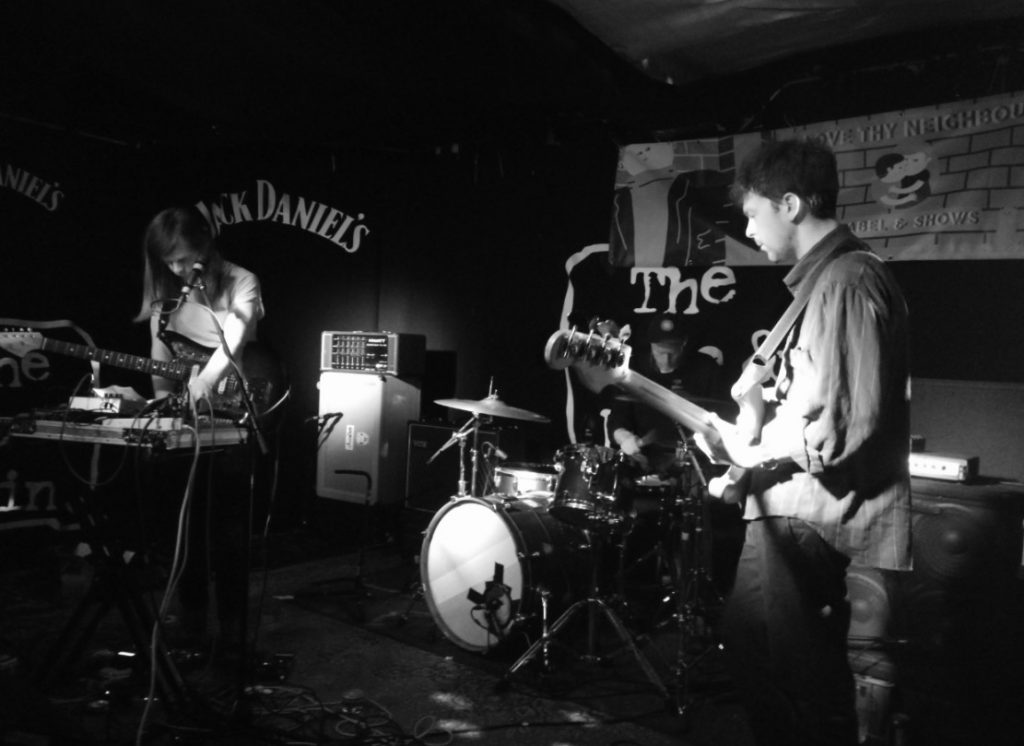 Their performance at the Hope & Ruin was engagingly hypnotic with the metronomic beat (especially their opening track) and I suppose one could refer to it as prog synth rock, but sometimes alluringly funky. However you describe it, Speak Galactic had enticed one William Doyle along to specially witness their set. Doyle has also been known under the stage name of East India Youth. His debut album ‘Total Strife Forever’ was nominated for a Mercury Music Prize Album of the Year Award in 2014.

No doubt they are aiming from great heights as they share their name with the 4,158 metre high mountain located within the Swiss Alps. They unleashed their debut album ‘Nacht’ in 2015 and their songs are based around solid staccato bass-lines, atmospheric drumming, dark moody playing from the keys and guitar with a very distinctive powerful female vocal.

Check them out here: https://jungfrau.bandcamp.com/

The final Love Thy Neighbour 10” for night 3 can be found here: https://lovethyneighbour.bandcamp.com/album/triiptych-three 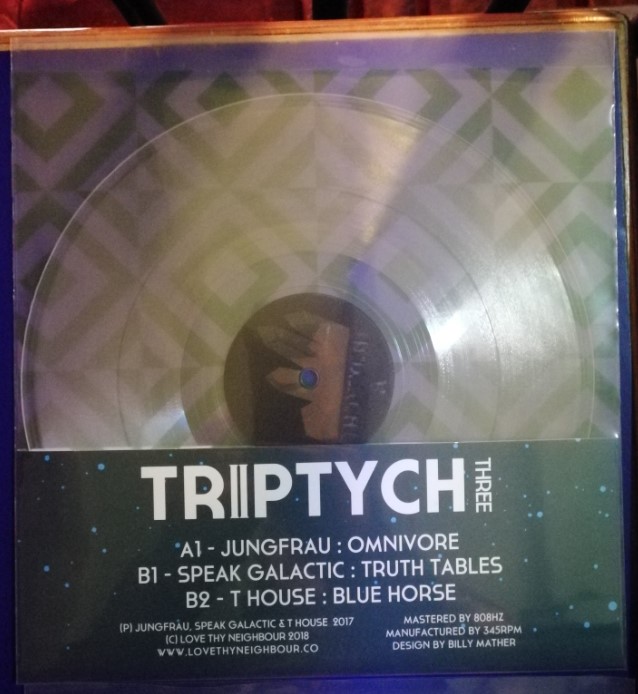 Roll on 2019’s Triptych! I wonder what Andy Rossiter has got up his sleeve for then…….. 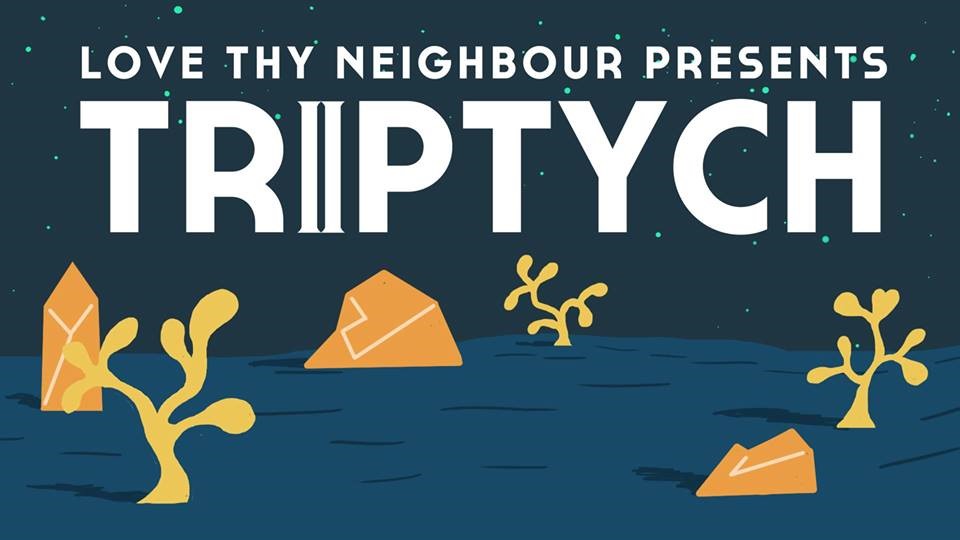