Brighton activist Tony Greenstein has published an email from Momentum founder Jon Lansman which called for his expulsion from the movement – the day before Greenstein appeared at a protest outside Labour HQ with a Momentum banner.

Pro-Palestinian campaigner Tony Greenstein was expelled from the Labour party last month over a series of abusive tweets he sent to fellow members, including some using the term Zio which the Labour party considers an anti-semitic slur.

Momentum, the campaign group set up to support Jeremy Corbyn, says that when a member is expelled from Labour, they are considered to have resigned from Momentum but have the right to have their case heard by the national co-ordinating group (NCG).

Greenstein, who remains a member of the local Momentum group’s steering group along with other expelled and suspended members of the Labour party, queried why his direct debit to Momentum was cancelled following his expulsion.

And in one of the replies he was sent, an email chain including Mr Lansman’s comments was included.

Jon Lansman wrote shortly after midnight on Monday, 19 March: “We do have to get rid of Greenstein but I am a bit concerned by the process which he will make a big deal out of possibly including lawyers … We may deem him to have resigned but there has to be a process involving the NCG or one they have agreed in which he has the right to be heard (not necessary in person) before a final decision is made. 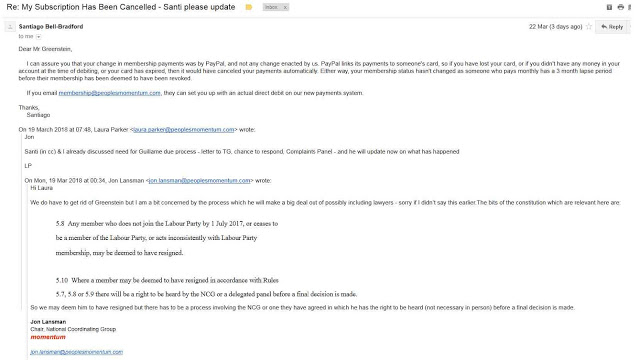 In response, Mr Greenstein has said he is now seriously considering going to court to gain an injunction against Jon Lansman and Momentum.

He said on his blog: “I followed this up with a further email to Lansman stating that if he wishes to engage in these tricks and deceptions then I shall be forced to treat him as I did the Labour Party and apply for an injunction.”

A Momentum spokesman said it does not comment on leaks.

The day after Mr Lansman wrote the email, Tony Greenstein and other members of Brighton and Hove Momentum took the local group’s banner to a demonstrating outside Labour’s London HQ organised by Labour Against the Witchhunt, who are protesting the expulsion from the party of members accused of anti-semitism, which they claim are based on spurious grounds.

After local Labour party members questioned how the banner came to be there, Mr Greenstein told Brighton and Hove News that he is still a member of the local Momentum group’s steering committee, along with two other expelled members. He refused to name the other two expelled members.

Suspended members Daniel Harris, who posted a video of Labour councillors’ faces superimposed onto dancing rabbis, and Greg Hadfield, who is accused of abusive behaviour towards city councillors, are also on the committee.

The national Momentum group did not comment on the use of the flag. However, where groups are in breach of its constitution, which states that non-members cannot hold positions or vote, its NCG would get in touch to resolve the issue.

Local Momentum groups do not receive any funding from the national group, but are able to send emails to Momentum members inviting them to meetings, events and to get involved in campaigns.

The Momentum Brighton and Hove banner was also used in a demonstration outside the Metropole Hotel while Mr Greenstein’s Labour disciplinary hearing was held outside – and at another picket of Labour’s National Complaints Committee, which decides whether members should be suspended, investigated and expelled.

Mr Greenstein took the Labour party to the High Court twice during his disciplinary process, represented by lawyers on a pro bono basis. He won the first case, against the party’s refusal to postpone his disciplinary hearing because of illness.

However, he lost the second, a bid to reveal the identities of his accusers, after the judge was read examples of his tweets and agreed that the party was right to take them into account when refusing to disclose that information, adding that they were “offensive in any context”.

Following publication of this story, Greg Hadfield asked to clarify that he has not been accused in the context of his suspension of being abusive to city councillors. He said the focus of his questioning at his preliminary interview was his treatment of council leader Warren Morgan and one of his members of staff, and criticised the 18-month wait for a full hearing.