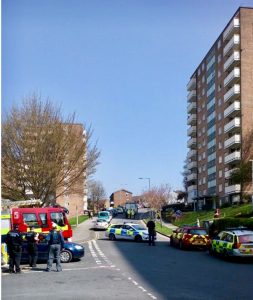 A block of flats in the centre of Brighton has been “made safe”, Sussex Police said.

The flats, Highleigh, in Grove Hill, not far from John Street Police Station, were evacuated earlier this morning (Saturday 14 April).

Bomb disposal experts were called in to deal with “items believed to be … hazardous and potentially explosive “.

At lunchtime Sussex Police said: “Residents are being allowed home after police evacuated a 12-storey block of flats in central Brighton.

“Officers arrived at Highleigh on Grove Hill at 7.20am and are treating items believed to be inside the premises as hazardous and potentially explosive.

“The flat has been made safe and residents are being allowed home.”

Detective Superintendent Carwyn Hughes said: “Thank you to everyone for their patience.”