It won’t be “anyone’s idea of a dream dwelling” but plans for a three-bedroom house with a small garden in Hove were approved by councillors on Wednesday (9 May). 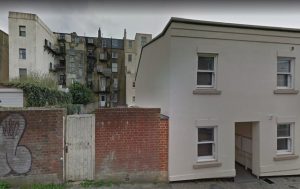 The tiny house will occupy a small plot at the back of 35 Brunswick Place. At 90sqm, it is only slightly bigger than the government’s minimal acceptable size for a three-bedroom house.

A small room on the ground floor was described on the plans as a study or place for sofa bed.

When questioned by councillors, planning officer Jonathan Puplett quipped that it might make a suitable space for “your least favoured guest”, having described the house as not anyone’s idea of a dream dwelling.

The proposed house is a similar design to others facing on to Farm Road.

Concerns about overlooking were addressed with small windows and roof lights in the two single bedrooms.