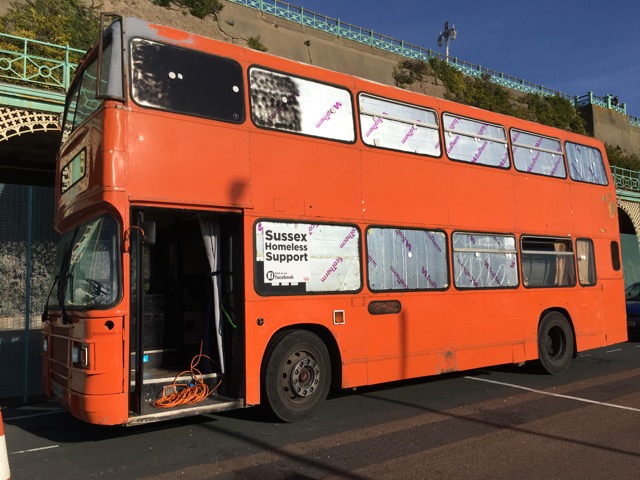 A bus converted into a homeless shelter will be driving from Brighton to Windsor this weekend to help rough sleepers wanting to avoid the royal wedding.

The leader of the Royal Borough of Windsor and Maidenhead provoked an outcry in January when he tweeted about “an epidemic of rough sleeping and vagrancy in Windsor”.

A letter he wrote to police asking them to use their powers to clear the streets of beggars and “bags and detritus” was leaked to the Guardian in January.

But the publicity inspired Sussex Homeless Support to offer its help to support homeless people this weekend rather than move them on.

Jim Deans, who has been running the bus shelter since January, said: “The many people descending on Windsor will cause distress to the small numbers of homeless living on the street, so we will be playing an important support role.”

Sussex Homeless Support says that Royal Borough has given the shelter a designated parking space, and that police will be signposting people towards it.

Rough sleepers will be welcomed drinks, food and offered support.

A spokesman for Thames Valley Police confirmed that they were working with the bus. He said: “Thames Valley Police is working closely with The Royal Borough of Windsor and Maidenhead council, The Windsor Homeless Project, and local support services in order to offer support to homeless people in Windsor.

“Additionally we are also working with a homeless project in Sussex to offer further support.”

“A scheme has been set up for those who choose, to store their belongings at the Windsor Homeless Project during the Royal Wedding, and our officers have been assisting with transport of belongings, however this is entirely voluntary to ensure the safety of the homeless community.

“We will continue to engage and work in partnership to support the communities of Windsor.

“The Royal Wedding is a national celebration and everyone is welcome, however everyone in Windsor on the day of the wedding will be subject to a search and screening. Anyone with large items that are deemed to be a security risk are likely to have those items removed.”

The shelter, which has 12 bunk beds, a changing room, toilet, kitchen and a living room, will be driven to Windsor on Friday, and return in time for the team to stage their weekly street kitchen on Sunday at the Clock Tower.