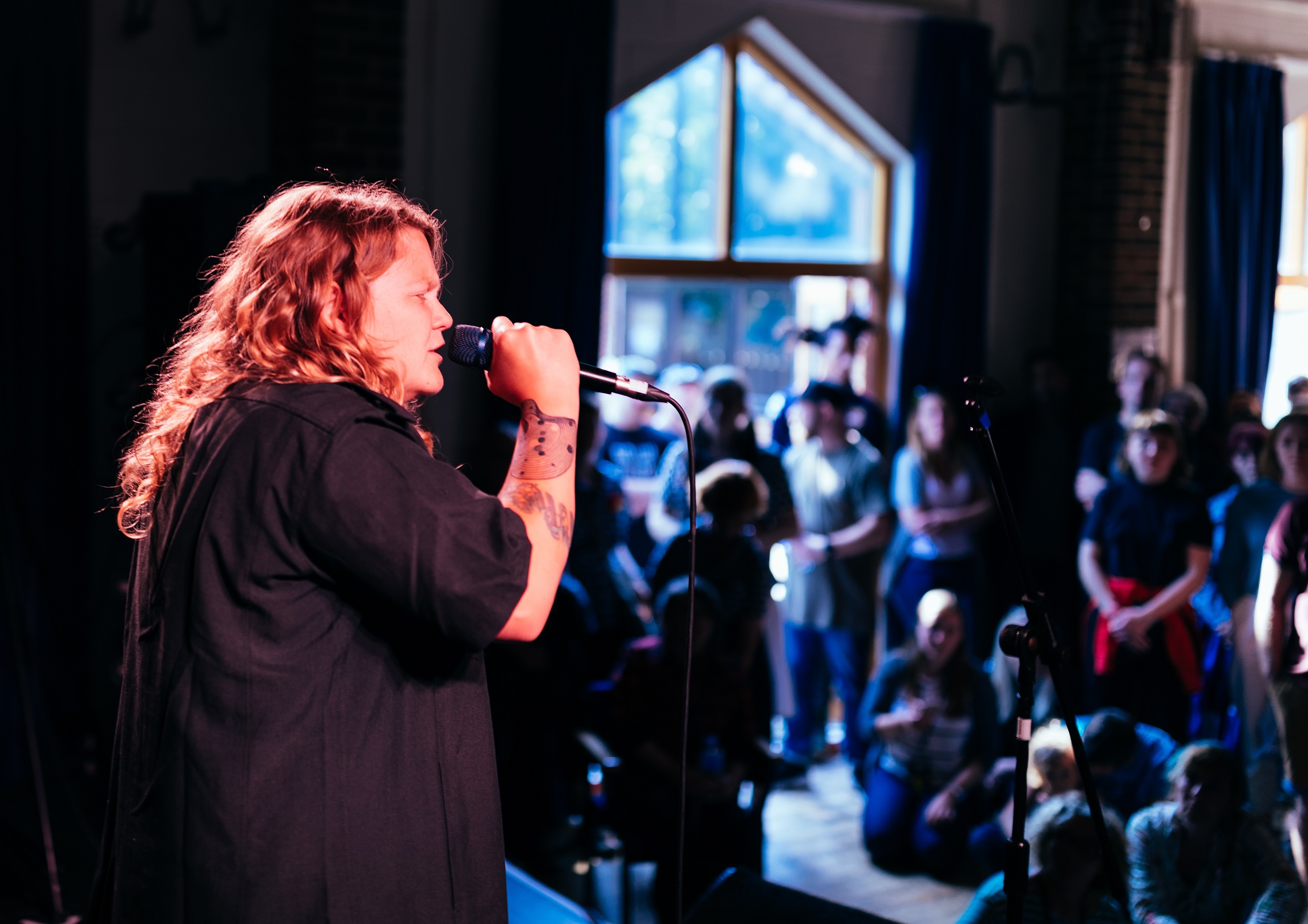 Brighton Festival 2017’s Guest Director Kate Tempest made a surprise return to the city on Saturday when she debuted her new album in full at Hangleton Community Centre.

Billed only as a special guest at 5pm, the sold-out show rounded off a glorious sunny day of free entertainment for residents of the Hangleton area, presented by Brighton Festival and Brighton People’s Theatre as part of the Your Place project.

Tempest told the crowd that she was “thrilled to be back” and asked for no filming of the work from her upcoming third solo album.

Tempest’s exclusive performance of the brand new work came after a barnstorming performance from Culture Clash, a training area for young writers and performers in the Brighton area, who performed a three way-battle of spoken artforms in Poets vs. Rappers vs. Comedians.

Kate Tempest commented: “This year I’ve come back to play a little unannounced gig at Hangleton Community Centre, which is one of my favourite places ever to play a gig, to be honest.

“I had this idea as part of my Guest Directorship that what would be the most exciting way to use that opportunity would be to bring some of what was happening in the Festival out to the communities around.

“And one of the most important things about that idea was that it had life after our year. It was such an exciting time for everyone, for the people that run the Festival to meet the community steering groups, and everyone was so blown away by how much enthusiasm and excitement there was.

“And now I’ve come back and it’s popping off basically, there’s a massive bandstand, everyone’s dancing, it feels really good here. I feel really chuffed and really happy to be back.”

Saturday’s line-up at Hangleton included a popular dance-a-thon through the decades from the Charleston to the Macarena with The Ragroof Players’ Happy Feet, as well as an interactive game zone for all ages with The Actual Reality Arcade.

Brighton and Hove Music and Arts (who united with Brighton Dome and Brighton Festival last year) presented performances by inclusive music group Orchestra 360 and the dustbin-utilising Percussion Ensemble at Morag Myerscough’s touring Belonging Bandstand, and the Brighton-based all-female group Qukulele and Brighthun Voices’ showcase of the rich musical heritage of Hungary were other highlights on the day.

Hosted by local community centres, and programmed in collaboration with local residents and artists, Your Place brings a diverse line-up of free performances, workshops and activities to the Hangleton and East Brighton communities.

Reflecting Tempest’s belief that “the arts should be in our communities, not only on elevated platforms or behind red velvet ropes”, the inaugural project in 2017 was a resounding success.

Over 2,000 people took part in Your Place across the two weekends, and participants describing the experience as inspiring and energising.

Brighton Festival 2017 also heralded the Pay-It-Forward initiative (which continued this year), offering the chance to donate £5 on top of ticket prices which was match-funded to create a £10 Festival ticket voucher for someone unable to afford the opportunity.

The response was phenomenal with over a thousand people choosing to pay tickets forward in the lead up to the festival.

The East Brighton-based second Your Place weekend runs over Sat 26 and Sun 27 May and will see The Ragroof Players and Culture Clash return, along with free football sessions from Albion in the Community, a singing workshop with Banyan Tree Theatre Group, comedian Jo Neary’s new children’s show Peg in the Gallery, and much more.