The Saltdean Lido crowdfunding campaign has hit its £100,000 target thanks to more than 1,200 pledges from the public. 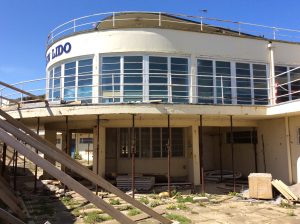 The crucial total was reached this evening (Tuesday 29 May) with a £7,000 donation from the Regency Society – the largest civic society in Brighton and Hove.

The crowdfunding campaign was started by the Saltdean Lido Community Interest Company (CIC) which was told to show that it had public support by the Heritage Lottery Fund.

The fund has set aside £4.19 million for the next phase of the restoration of the art deco pool and building.

But it wanted to be sure that the project was sustainable hence the request for the public show of support.

Last summer the 1930s pool was restored and reopened for the first time in years – and with heating to make the water more temperate. This was phase one.

The next phase is a £6.8 million project to renovate the main building and run it as a café, events venue and community space.

CIC director said that the Lido pavilion would make the perfect setting for a wedding reception, for example.

Sally Horrox, who chairs the Saltdean Lido CIC, said: “We would like to thank the Regency Society who have pledged £7,000 this evening which has got us to our target on our Crowdfunder.

“We are absolutely delighted with the news and cannot thank everyone enough for what they have done.

“From toddler walks and quiz nights through to swimathons and sponsored runs we have been blown away by pledges from community groups, schools, church groups, local businesses and most of all local and not-so-local folk just committed to saving Saltdean Lido. 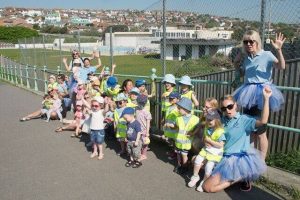 “It’s been amazing and we’re so proud to be part of such an amazing community.

“The job’s not finished and there is still a lot to fund so please anyone still doing things for the crowdfunder continue and go to our website with any queries or our social channels.

“Thank you on behalf of Saltdean Lido and fingers crossed on the Heritage Lottery Fund decision in June.

“The Regency Society is Brighton and Hove’s largest civic society and is a registered charity.

“It aims to promote the protection and improvement of the city’s built environment and to educate and inform people about it.”

“The Lido reopened to the public in 2017, attracting more than 40,000 visitors and two Brighton and Hove business awards.

“This was a triumph for the community interest company set up to pursue the ambitious plan to take over and restore the Lido. 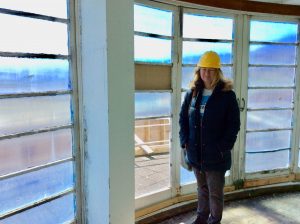 “The CIC has managed the Lido very successfully and has put together an impressive bid for funds to restore the building. We are proud to be able to support this campaign.

“Despite the success of the pool since the reopening, this unique and important modernist building’s future is insecure. Income from the lido is not sufficient to cover the costs. The building is in a sorry state of dilapidation.

“The crowdfunding campaign aims not only to secure its future but also to generate income by providing a café and local community centre.

“Success in raising the target £101,804 will help unlock Heritage Lottery funding for the remaining £4.19 million needed for the full restoration and so provide a more secure future for the entire complex.

“The lido building is the only grade II* lido in the country. Local architect RWH Jones designed it in 1935 as part of a vogue both for seaside lidos and the then new ‘moderne’ (art deco) style. The Regency Society believes it is too important to allow to decay further. 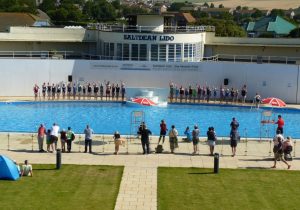 “Described by Historic England as ‘probably the finest Lido in England’, it is an essential part of the heritage of Brighton and Hove – one of very few 20th century buildings to fall into this category.

“We regard its restoration as a top priority and are therefore drawing on our reserves, as we did in 2017 for the Madeira Terraces, to support this campaign.”

Regency Society chairman Roger Hinton said: “Restoration of the Saltdean Lido site is one of Brighton and Hove’s most important heritage projects.

“We believe that it will not only save a fine building but also create an important asset for the local community.”