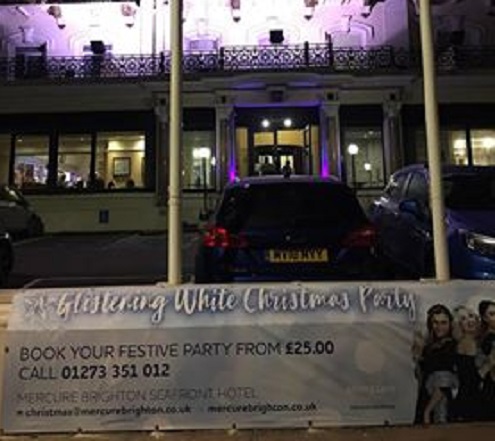 The sun may be shining and the beaches packed, but one Brighton hotel is already urging people to book their Christmas parties there with a large banner on the seafront.

The Mercure Hotel in King’s Road put the banner up this week – almost 200 days before Christmas.

The hotel says it’s excited to be advertising its seasonal facilities and it’s already getting bookings for Christmas – but at least one neighbour is aghast at the idea of seeing the banner for the next six months.

Monika Staroszczyk joked: “We need a petition to take this down! I’m next door and I will have to see this every day until December. It’s crazy!

But hotels sales manager Lisa Johnson said: “I’m quite excited that we are the first to have our Christmas banner out on display. I know many may think it is too early but we are already getting bookings for Christmas.

“Believe it or not, we actually received our first bookings for this Christmas in January. These do tend to be returning guests but particularly larger companies will inquire and book within the first six months of the year.

“We also find that if a group have a specific date for their party they will book earlier to guarantee they get the party they want.

“I don’t think we would ever say that we are completely fully booked as we can offer parties seven days a week, with up to two events running at any one time. This means that there is always something available for those that are flexible.

“However, some of our peak Fridays and Saturdays could be fully booked by the end of August.

“Since our Christmas banner went out on Monday we have already received a number of new inquiries. We are now likely to have the banner out until late November or early December.

“We actually love Christmas here at the Mercure Brighton. Christmas is a major part of the hotels business and we are always working on it 12 months of the year.”