Dozens of “good neighbour” volunteers were given a public thank you when Brighton and Hove mayor Dee Simson joined them at a celebration.

Councillor Simson also praised Brighton and Hove Impetus, the charity behind the Neighbourhood Care Scheme, at an event to mark the scheme’s 20th anniversary.

The mayor addressed more than a hundred guests – many of them past or present members and volunteers – at the anniversary party at the Sallis Benney Theatre in Brighton.

She said: “I was delighted to be invited to the 20th anniversary party of the Neighbourhood Care Scheme and to meet so many people whose lives have been improved and enriched as a result of the service.

“My focus as mayor includes the role of the community and voluntary sector and the work of Impetus and the Neighbourhood Care Scheme is exemplary in the area of tackling social isolation.

“Brighton and Hove is a wonderful city with so much to offer, however continued efforts are needed to tackle loneliness and its effects.”

The scheme has been described as “harnessing the power of neighbourly goodwill” to tackle loneliness.

Seventy per cent of the people supported by Brighton and Hove Impetus say that isolation is the most difficult aspect of their life.

The charity’s Neighbourhood Care Scheme tackles the issue head on by helping isolated older people and people with physical disabilities and their carers.

Local volunteers are matched with a person in their community and spend around an hour each week providing company to them.

Impetus said: “A massive 41 per cent of these older people are living alone, higher than the national average. Loneliness and isolation impact health and wellbeing and can have a devastating impact on people’s lives, linked with depression, disease and even increased risk of death.” 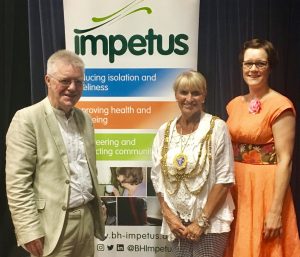 Sean de Podesta has been leading the team of staff and volunteers, making vital connections to reduce social isolation and improve wellbeing since 1998.

He said: “I am really fortunate to have been able to do the best job in Brighton and Hove for so long.

“The Neighbourhood Care Scheme has enabled over a thousand volunteers to form, often life-changing, relationships with their neighbours.

“The good news is that the rich well of neighbourly goodwill which we have harnessed the power of is far from exhausted. In just the last three months, we have matched a further 44 volunteers – a good start to the next 20 years.”

Impetus chief executive Jo Ivens said: “We all had a great time celebrating the achievements of the Neighbourhood Care Scheme.

“Thank you to all our guests and to the mayor for attending. Our commitment to tackling social isolation continues, through the good work of the NCS and our other advocacy and social prescribing services.

“We are also working hard to share our learning to ensure that other localities can learn from our positive experience in Brighton and Hove.”