Neighbours are objecting to plans to build flats on the site of an orthodox synagogue. 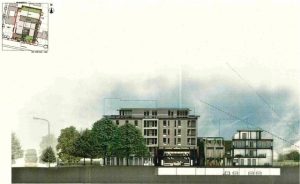 Flats are planned for the site of a synagogue in Hove

As well as replacing the nursery and synagogue, the development includes 45 homes and an underground car park with 57 parking spaces.

A co-working hub for start ups and a kosher café also form part of the scheme.

Plans submitted to Brighton and Hove City Council follow public consultation sessions a couple of months ago, in May, as well as last November.

So far 20 people have objected to the project with four writing letters of support.

One online objection said: “Is no building or space safe any more?

“Why can’t the existing buildings be kept – redeveloped, rather than just knocking everything down?”

Concern about the height of the two blocks was raised by a number of objectors.

An online comment said: “The height of the build is of concern. There will be a loss of natural light to neighbouring properties.

“There seems to be a trend for building multi-storey developments in Hove.

“These are out of keeping with the area. Just because a precedent has been set on New Church Road does not mean we should keep making the same mistakes.” 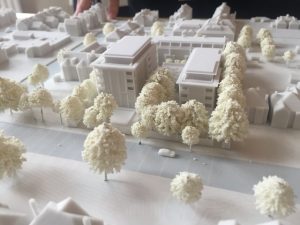 A model of the proposed flats and new synagogue

The closeness to St Christopher’s School was also mentioned by a number of objectors.

An objector said: “I object to the height and density of this build.

“It is excessively large – a complete over-development for the plot.

“I have strong concerns about building right up to the party wall with St Christopher’s school (the two sites will essentially be joined).”

The Hebrew community is working on the scheme with the Bloom Foundation which was set up by Brighton and Hove Albion chairman Tony Bloom.

In supporting documents their planning agent DMH Stallard, the law firm, said that declining numbers in the once-thriving Jewish community were part of the reason for redeveloping the site.

DMH Stallard said in a planning statement that Brighton and Hove had lost more than 20 per cent of its Jewish population between 2001 and 2010.

At the moment the average age of the Jewish community with membership at a synagogue is around 75.

The statement said: “The future existence of a Jewish community in the city is, therefore, questionable.

“This development is aimed at retaining and attracting young families to the area to secure the future of the Jewish community in the city. ”

The application is currently open for comments on the council’s website.