Brighton and Hove Albion have signed a young Danish winger, Anders Dreyer, the club has announced. 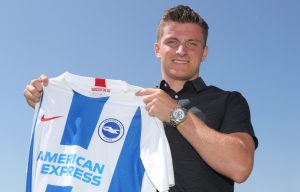 Albion said: “Brighton and Hove Albion have completed the signing of winger Anders Dreyer from Danish Superliga side Esbjerg, on undisclosed terms.

“The 20-year-old will link up with Albion’s under-23 squad ahead of the new Premier League 2 season, which kicks off against Liverpool on Friday.”

Under-23 coach Simon Rusk said: “We are delighted to welcome Anders to the club.

“He arrives here on the back of a prolific first full season in the Danish first division, in which he topped the scoring charts and helped Esbjerg win promotion back to the

“I’m looking forward to working with Anders this season, and helping him continue his development here with us.”

Albion said: “Bramming-born Dreyer made his debut for Esbjerg in April 2017 and became a regular in the first-team last season, scoring 18 goals – including a hat-trick in the second leg of a promotion play-off.

“Capped by Denmark at under-17 level through to under-20 level, he’s already played four times this season, scoring once, and has overall stats of 23 goals in 49 senior league, cup and play-off appearances for Esbjerg.”