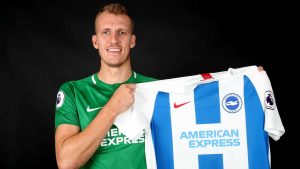 Albion were reported to have initially bid £3 million for the Latics skipper and to have raised their offer to £4 million – or even £5 million.

The club have not disclosed the transfer fee but are sending Burn back to the Championship new boys on loan at least until January.

“The 26-year-old has signed a four-year deal with Albion, but will remain on loan with Wigan until the January transfer window, when he will return to the south coast.”

Albion manager Chris Hughton said: “We are delighted to welcome Dan to the club. He has a wealth of experience from his time with Fulham, Birmingham City and Wigan among others.

“He’s an imposing figure and had an excellent season helping Wigan to the League One championship. He also impressed in an excellent FA Cup run to last season’s quarter-finals.

“He’s currently recovering from an injury sustained during pre-season but he will remain with Wigan. That also benefits both Dan and ourselves as it will enable him to get fully up to speed in terms of fitness before January.”

Albion added: “The 6ft 7in defender began his career in Newcastle United’s academy but dropped into non-league football to begin his senior career.

“An impressive two-year spell at Darlington led to a move to Fulham, then in the Premier League. His spell there saw him play 69 times for the Londoners and also included loan moves to Yeovil and Birmingham City.

“He moved to Wigan in 2016 and to date has played 97 times for the Latics, scoring seven times.”

The Seagulls are thought to be close to signing Valencia full-back Martin Montoya. The former Barcelona and Inter Milan defender has played for Spain at under-17, 18, 19 21 and 23 level. Now 27, has also represented Catalonia.