Brighton and Hove Albion have signed a teenage Swedish midfielder on a three-year deal, the club said this evening (Thursday 9 August). 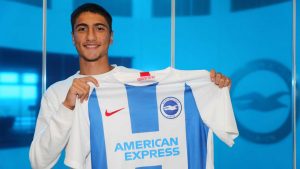 Albion said: “Brighton and Hove Albion have completed the signing of midfielder Peter Gwargis from Swedish second-tier side Jonkopings Sodra IF on undisclosed terms.

“The 17-year-old has signed a three-year deal with the Seagulls and will link up with the club’s under-23 squad for the 2018-19 Premier League 2 Division 1 season.”

Under-23s coach Simon Rusk said: “We are delighted to welcome Peter to the club. He will complement the options we already have in the under-23 squad, at the same time as continuing his own development.

“Peter has benefited from playing first-team football in Sweden over the past couple of seasons and he will now take on a different challenge with us in the Premier League 2.

“He has shown his credentials during his time in Sweden and I am looking forward to helping him adapt to the English game.”

Albion said: “After playing for IFK Oxnehaga at the beginning of his career, Gwargis moved to Husqvarna FF and made his first appearance for the Swedish third-tier club in 2017.

“Gwargis scored his first senior goal against FC Rosengard in September that year, which triggered a consistent run in the team, as he ended the campaign with 19 league appearances.

“The Swede signed for Jonkopings Sodra IF in the second division before the end of the year and made his debut for the club against Landskrona in April 2018.

“Gwargis fired three goals and claimed three assists in 17 appearances as he quickly established himself as a regular in the starting line-up.

“The midfielder has also featured for his country at international level, claiming three caps for Sweden’s under-17s.”